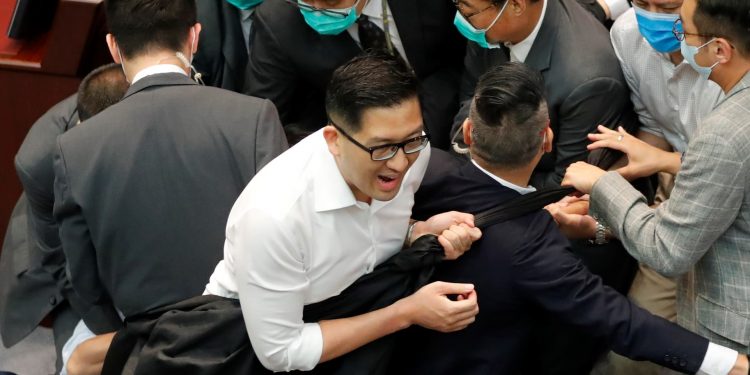 Hong Kong police have arrested pro-democracy lawmakers over involvement in protests in 2019, including one who was injured when a large group of thugs attacked protesters and civilians at the Yuen Long transport station.

The arrests come amid a crackdown on dissent and freedom of expression.

The Democratic party said two members – the legislators Ted Hui and Lam Cheuk-ting – were arrested at their homes on Wednesday morning. It said both men were suspected of offences related to a protest on 6 July 2019 outside the Tuen Mun police station.

A post on Lam’s Facebook page said he was suspected of conspiracy to destroy property and obstruction of justice. It said he was also arrested on suspicion of rioting at the now infamous Yuen Long MTR incident, when armed thugs reportedly connected to triads attacked protesters and civilians. Lam was injured at Yuen Long and hospitalised with facial injuries requiring stitches.

Over time the narrative of the incident changed and Lam has since been accused, including by pro-Beijing legislators, of bringing protesters to the station. A small rally in January called for his arrest.

Lam has maintained the white-clad men were attacking people before he arrived at the station, citing CCTV footage as evidence, and has been critical of police for an apparent lack of action against the attackers.

Victims of the attack, including Lam, filed a civil suit against Hong Kong’s police commissioner earlier this year accusing the force of failing to protect people.

Police were widely criticised for failing to attend emergency calls from Yuen Long for over half an hour and making no arrests on the night, prompting accusations of collusion which were exacerbated when pictures emerged of police officers standing alongside the attackers.

However in May the police watchdog largely cleared Hong Kong police, saying while they were slow to act it saw no evidence of collusion, and that it believed taking any arrest action on the night “would only escalate the situation”.

More than 40 people have reportedly been arrested over the incident so far.

The arrests come almost two months after Beijing implemented a sweeping national security law in Hong Kong that has crushed dissent and created a chilling effect across the city’s media and academia. Protest slogans, including the increasingly popular “liberate Hong Kong, revolution of our time”, have been banned, and so far 25 people have been arrested under the law, including the media tycoon Jimmy Lai. Only one person has so far been charged.