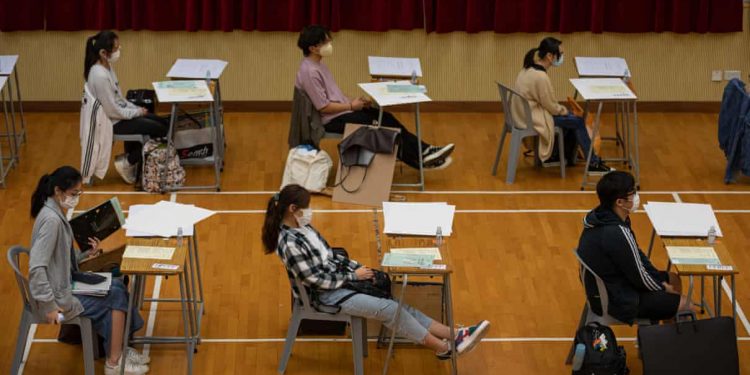 Hong Kong publishers have been told to remove references to the separation of powers and protest slogans from school textbooks, in a move decried as censorship by the authorities.

Six publishers voluntarily submitted eight textbooks to the education regulator for vetting and were asked to make revisions, reports in Hong Kong and mainland media said on Wednesday.

It’s the latest in a series of extraordinary moves on Hong Kong’s education system since Beijing’s national security law was implemented in late June.

Liberal studies has been mandatory for senior students in Hong Kong for more than a decade, but has drawn criticism from some pro-Beijing figures who claimed its teaching materials – which schools can choose without government approval – were biased. Last year a voluntary review service was offered to publishers.

According to a comparison conducted by the South China Morning Post, two publishers have removed the phrase “separation of power” in sections about Hong Kong, and other illustrations of Lennon walls and protesters holding placards have been replaced. At least one textbook added text to say that if protesters violated laws they would be held legally accountable, Chinese state media outlet the Global Times said.

Cheung Yui Fai, executive council member of the Professional Teachers Union, told the Guardian government attempts to censor school subjects had been going for some time. The vetting meant the textbooks now “may not reflect the real picture” of Hong Kong, he said.

“We would like the students to have the full picture of the development of the social issues, including the pro government side and the criticism of the governments [in Hong Kong and mainland China].”

“In Hong Kong now the political pressure is really high for teachers. If you’re brave enough you can try your best to tell the truth to the students and lead them to have more rounded discussion of the social issues.”

Cheung also said the inefficiency of the vetting process, which began before the national security laws were passed, meant the new versions had been approved only a week before school returned, and may face more amendments if even the new version were found not be within the law.

Tang Fei, a principal at Hong Kong’s Heung To Secondary School, told the Global Times previous versions of the textbooks failed to prevent students “falling into the traps of opposition groups’ propaganda”.

“It is entirely untrue and pure propaganda to say that Hong Kong society widely believes in the so-called separation of three powers, and opposition groups used to implant ideas in textbooks to promote their political agenda among the youth.”

Despite assurances from the government that the law would make no difference to the regular lives of law-abiding Hong Kongers, schools and universities have experienced a chilling effect and actual curtailments on what they can teach, discuss, and allow.

Security chief John Lee has previously pledged to “deal with the schools” in the government’s crackdown on dissent. Lee claimed around 40% of the protesters arrested were students, and more than 100 were teachers.

The education bureau and a textbook publisher have been contacted for comment.