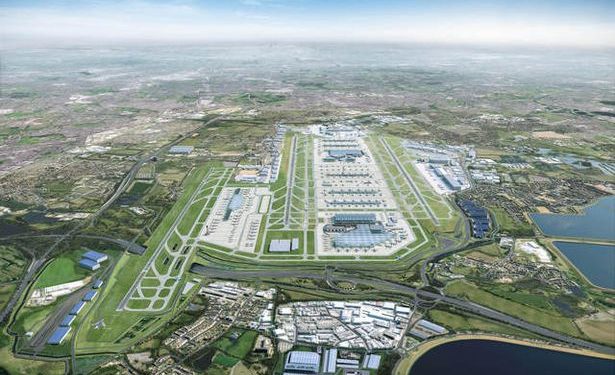 London (Brussels Morning) Silence. Nary a sound, bar the geese that honk while waddling along the offshoots of the Thames. The west suburbs of London near what used to be Europe’s largest airport is experiencing quiet skies without a plane in sight as the pandemic has brought air traffic to a grinding halt for the second time this year.

Heathrow’s demise of second place to Charles de Gaulle, Paris, could well change, however, if the UK’s highest court rules in favour of the private airport, after hearing its appeal last month to push through expansion for a third runway.

A positive outcome may put the world’s busiest airport on top in more ways than one, as within site proposals for the infrastructure project is a proposition for what would end up as one of Europe’s largest detention facilities.

The mega facility will replace the existing Immigration Removal Centres (IRCs) to be demolished by a third runway at Heathrow Airport if the controversial plan goes ahead.

The UK has one of the largest immigration detention systems in the continent and its immigration policies, a political football, are receiving increasing criticism.

At the beginning of the year, a removal flight scheduled for Jamaica drew sharp rebuke from lawmakers. Lawyers said passengers, dubbed “Jamaica 50”, included people who came to the UK as children and had no memory of their country of birth.

Home Office officials regularly seek to deport foreign offenders, but a leaked report urged the government to end such deportations in the wake of the Windrush scandal, where it emerged that children of Caribbean-born parents who came to the UK before 1973, were being illegally detained and deported.

The report’s earlier draft criticised the “hostile environment policies” introduced by former Prime Minister Theresa May when she was Home Secretary, aimed at making life intolerable for people who had entered the UK illegally and at reducing immigration numbers. Many have ended up being wrongly classed as illegal immigrants with stark consequences.

In September, the UK parliament’s Public Accounts Committee issued a damning assessment on immigration policy saying it was concerned about the little evidence the Home Office has to inform its decisions with no understanding of what impact its £400 million annual spending is having or the support people need to navigate its systems “effectively and humanely”.

That’s’ why Michael Darko spoke at an event earlier this year, to raise awareness about any potential site, least one that could rival the largest immigration detention institutes in Europe.

Darko himself left Ghana when he was four-years-old and eventually landed in the UK when he was 12 with his family, although his father abandoned him soon afterwards. He found himself without papers and outside the system by the time he turned 16, while his younger siblings were taken into care. Darko’s life spiralled and he became destitute.

Using someone else’s ID to find work, he went to prison for the crime. Over one year later, in 2013, he was moved to an immigration detention facility with the threat of deportation over him. But with nothing to prove his Ghanaian birthright, he’s been in a tug of war with the government to be given legal status ever since, within the country’s massive immigration detention complex.

Current facilities in the UK have been at the centre of scandal and in some cases found to permeate a “culture of abuse” among its staff, such as in Brook House, near Gatwick Airport.

At least 34 deaths in detention have been recorded over the last few decades. And a murder at Colnbrook gained media attention last year.

“I’ll never forget the advice I was given when I came to Brook House,” Darko tells Brussels Morning. He explained how after asking for his own room, guards told him “to beat up my roommate and threaten to do the same to anyone they move in so that you’re treated as high risk”. He said the treatment by some staff was “humiliating”.

The UK is also one of a few countries that has no upper time limit to detention, which campaigners say breaches human rights. 33 year-old Darko says it is easy for people to despair very quickly.

“People said to me, ‘Brother, the only escape from here that I see is dying’. I can’t shake that”, he says.

Harmondsworth with a capacity of 676 is currently said to be the largest facility in the UK. According to data held within the Global Detention Project database, it could be the biggest in Europe, bar a centre on the Greek islands – Corinth Pre-Removal Detention Facility.

Both Colnbrook and Harmondsworth IRCs are run by private company Mitie although it’s unclear who would run the new facility. Potential replacement sites were proposed in a consultation last year, indicating a preferred option to the southeast of Heathrow on greenbelt land.

The new IRC will maintain current detention spaces of around 3,300 across eight main detention facilities, seven of which are privately-run. These, along with additional short-term arrangements and beds in government-run prisons, are intended to house people who have exhausted their legal rights to remain.

The reality, according to Mary Bosworth, a criminology professor at Oxford University, is the centres are running below capacity and most people without secure immigration status in the UK do not stay in them.

At the same time – at least before the pandemic –  many held in IRCs still had active legal cases, she says. The current detention estate, according to Bosworth, doesn’t appear to be modelled on a clear evidential need, “They are, in many respects, a political choice and a bureaucratic artefact”.

“It’s outrageous to build another detention centre, especially when it’s on public green space, in an area that doesn’t have a huge amount of green space”, said a spokesperson for campaign group End Heathrow Immigration Detention (EHID), condemning as well the “large human costs” of detention.

Hounslow council attended the event with Darko, explaining it was opposed to the relocation of the facility in principal. Local councillor Salman Shaheen said, “We must not allow our land in Hounslow to be sold off to build any detention centres”. Hina Mir, 39, a local resident and asylum lawyer, said she is against any new IRC being built in the area, “The authorities should divert those resources to where they’re needed, like the NHS”.

2018 figures show the government spent more than 500 million pounds on detaining people plus 16.2 million pounds on damages for unlawful detention, between 2013 and 2017. One watchdog says over 32,000 people are deported each year.

The government has already pulled its backing for the planned expansion and the pandemic has seen Heathrow close one of its runways down as the airport hemorrhages money while travel restrictions are in place. Its 64 percent decline in profits is in any case likely to lead to a delay in construction that could mean a new runway in 10 to 15 years if the Supreme Court rules in HAL’s favour.

Infrastructure plans surrounding the proposed site are also pending, which may make the prospect of a new detention facility moot.

Still, campaigners are preempting any activity within the immigration detention complex, to highlight the significant implications of any new measures.

“I can tell you all the sad things, but I’m also stronger, I am fearless and I’m still fighting,” says Darko, “You should always remember the resistance”.