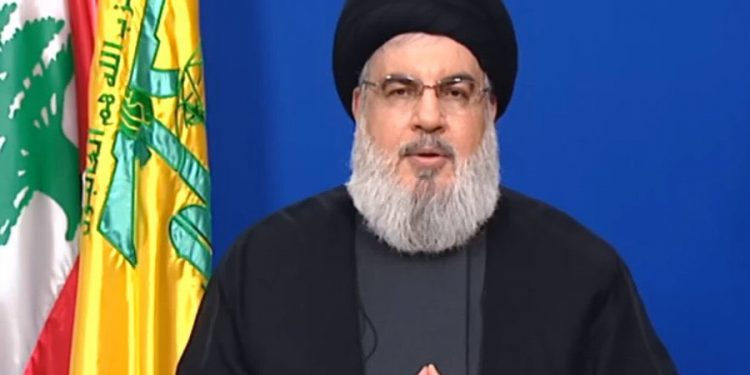 In a televised speech this week, Hezbollah leader Hassan Nasrallah expressed the movement’s support for French President Emmanuel Macron’s initiative on forming a new government in Lebanon, but made clear that he does not accept the  French President’s ”condescending’’ tone. Earlier in the week, Macron said he was angry with the Lebanese political establishment for not committing to a swift appointment of a new government when prime minister-designate Mustapha Adib stood down.

”He cannot act as the governor of Lebanon”

The Shia cleric said reiterated his movement’s support for the plan to form a new government. However, he denounced what he described as the intimidatory manner in which negotiations had been conducted in the past few weeks. “President Macron accuses us of intimidation, but it is he who follows a policy of intimidation towards the Lebanese political forces”, he maintained.  “We do not accept you accusing us of treason” he added, noting that Hezbollah had welcomed Macron’s visit in Lebanon and had agreed on the basic premises of the initiative but not that Macron would pose as “the attorney general or the judge or the governor of Lebanon”.

According to Nasrallah, Hezbollah had been facilitating the formation of the new government following the resignation of caretaker prime minister Hassan Diab’s government earlier last month. He accused the country’s Sunni former prime ministers of imposing their own choice regarding the number of ministries to be created as well as negotiating the names of candidates for the cabinet portfolios.

Mustapha Adib’s effort to form a government tripped over the demand of the “Shi’a tandem”, meaning the Amal movement and Hezbollah, to name the next finance minister. In an attempt to break the standoff, former prime minister Saad Hariri proposed that an independent Shia figure be appointed to the post, a suggestion that did not sit well with the opposition of the Shi’a political forces, which in turn led to Adib’s resignation.

With regard to other points of controversy during the negotiations, Hezbollah expressed reservations about a 14-member cabinet, arguing that it was too small and that more representative cabinet of 20-24 ministerial posts was preferable. Hassan Nasrallah insisted that Hezbollah’s participation in the government is necessary in order to protect the”back of the resistance” and prevent the Lebanese economy from further collapse. Nasrallah’s apparent weariness of the reforms outlined by the French is reflected in his chacterisation of their reform agenda as an attempt to force the country into negotiations with no conditions, no questions and under the threat of sanctions.

Another blow to the Lebanese economy

Mustapha Adib’s failure to form a new cabinet poses a new risk to the already embattled Lebanese economy. Lebanon defaulted on its debt payments for the first time ever in March this year. Local currency has plummeted since last year and poverty has doubled to the point where it is affecting more than half of the population. Moreover, negotiations with the IMF on a deal to unlock much needed financial aid were put on hold this summer after the devastating blast at the port of Beirut.

The Lebanese pound has dropped a further 8% since Adib’s resignation, while the US dollar was trading at 8,300 pounds on the black market compared to the official rate which remains at 1,507 pounds to the dollar, according to AP.

With prospects for a quick exit from the political deadlock now considerably dimmed, the financial crisis is expected to worsen in the next months. This could force the government to end subsidies for fuel and medicine, leading to a price hike, which would only compound the plight of the Lebenese population.

EU voices disappointment and concern over the new crisis

The European Union expressed its disappointment and concern over the new political crisis in a statement from the EU High Representative Josep Borrell’s office which noted that the country is caught in a maelstrom of humanitarian, socio-economic and financial crises, all while battling the coronavirus pandemic and attempting to reconstruct Beirut.

The EU has already mobilised 64 million euros for the emergency response following the Beirut port explosion. However, EU Commissioner for Crisis Management Janez Lenarcic warned mid-September that further EU aid may be conditional upon the formation of a new kind of government “I’m talking about governance, not only economic reforms. There has to be a change in the way this place is governed”, Lenarcic said on France24. The EU supports efforts by the Lebanese caretaker government and the IMF to reach an agreement so as to unblock resources for the Lebanese economy to recover. As for the role of Hezbollah in the new government, the EU Commissioner said that the EU wishes to see the “entire Lebanese political class unite behind the task”.

France’s President Emmanuel Macron has announced a new aid conference to be held under UN and French auspices in mid-October. It would review the conditions under which further aid could be administered. Ideally, Lebanon should present a new government with six weeks, a short timeframe, given that the procedure is now set to start from scratch, first necessitating a deal on a new prime minister-designate, followed by an agreement on how to appoint ministers and which figures would make up the new government.

It is widely held that the outcome in Lebanon depends on the US elections. Nasrallah maintains that Hezbollah’s take on foreign policy is not dictated by Iran.