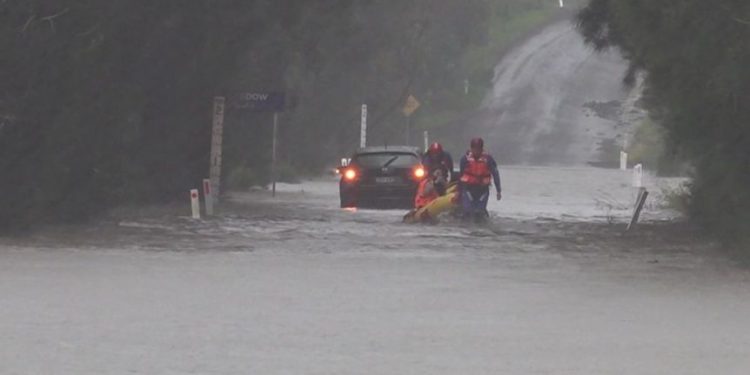 Evacuation orders are in place for several towns on the NSW south coast battered by heavy rain and flash flooding.

Up to 200mm of rain hit a number of towns including Moruya, Nowra and inland at Captains Flat over the 24 hours to Sunday evening, with up to 300mm in some areas.

There are concerns about Moruya where there is major flooding along the Deua river which peaked at 8m on Sunday afternoon. There were fears the Moruya river could also peak on Sunday night with moderate flooding forecast.

The State Emergency Service has ordered residents in Moruya’s centre to evacuate to higher ground.

“If you remain in the area after 5pm you will be trapped and it may be too dangerous … to rescue you,” the SES said.

An evacuation centre has been set up at the Village Centre at Batemans Bay.

The SES has also directed people in low lying areas of Sussex Inlet to evacuate with flood levels expected to impact properties.

Sussex Inlet is forecast to rise to 1.2m with the high tide on Sunday night and the nearby river at Island Point Road is expected to peak around 1.3m later on Sunday causing minor flooding.

People who can’t stay with family and friends have been advised to go to the Sussex Inlet Police Station to register for emergency accommodation.

An evacuation order has also been issued for several suburbs of Nowra including Terara, East Nowra, Worrigee and North Nowra with the Shoalhaven River expected to rise to 3.3m on Sunday night.

The SES has warned properties in the affected areas are likely to become inundated and people could become trapped.

Residents who can’t stay with family or friends should go to Nowra Police Station to register for emergency accommodation.

The Bureau of Meteorology has warned the Shoalhaven River could peak near 4.4m on Monday afternoon with major flooding possible.

SES Commissioner Carlene York noted the ground across parts of the south coast has become unstable as a result of last summer’s bushfires with residents warned to be alert for landslides and fallen trees.

The SES has responded to more than 700 calls for help and conducted more than 18 flood rescues across the weekend with most calls coming from Berry, Nowra, Broughton Vale and Gerringong.

More than 20 homes at Broughton Vale near Berry were also cut off by floodwater.

Bureau of Meteorology senior flood hydrologist Justin Robinson said heavy rains were expected to ease on the south coast later on Sunday and move towards Sydney, the Central Coast and possibly into the Hunter.

“Hopefully over the next 24 hours the worst of the weather will be over,” he said.

Heavy rain also hit the ACT with flood warnings issued for Queanbeyan and Oaks Estate, while floodgates were opened on the Scrivener Dam on Canberra’s Lake Burley Griffin.