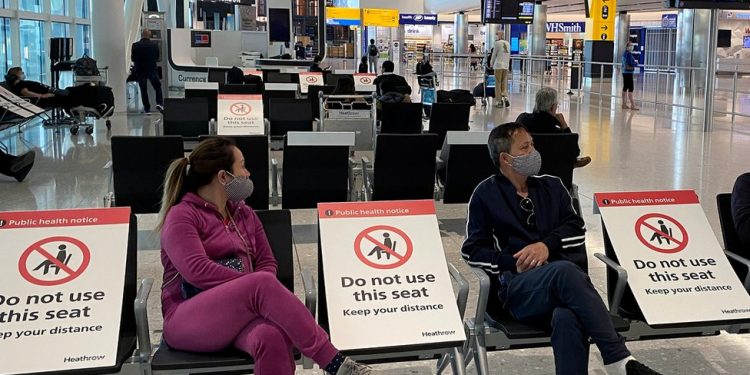 London (Brussels Morning) Departures at Heathrow will start testing passengers for COVID-19 for those wishing to pay for a test before reaching their destination to avoid quarantining on arrival.

The tests will be debuted with passengers flying from Heathrow to Hong Kong Tuesday, which will cost £80 with the results ready within an hour.

While the UK’s borders have been open for some time, some restrictions at destination countries still exist, and a positive test on arrival could necessitate travellers to isolate for two weeks.

The UK is known as an “at-risk” country by many.

Collinson, the company behind the tests, hopes it will help open up travel to more destinations across the world, including Italy, where those entering must prove a negative result or else test on arrival.

Personnel at Heathrow Terminal 2 and 5 will administer a saliva swab or ‘Lamp’ test, which has already elicited some noted limitations.

“For business passengers £80 is probably quite competitive but we’ve certainly said to the government in terms of introducing a test on arrival in the UK anything from £50-£60 would be better”, said Tim Alderslade, chief executive of the aviation trade body Airlines UK.

The Lamp test’s accuracy is also not considered superior to the PCR test, for which results may take longer.

It may also not be adequate for destinations that want to see a negative PCR test result on arrival.

The saliva swab won’t be applicable for arrivals into Heathrow airport, however, where there is a separate testing facility. Although, the facility is currently unused as the government has not yet greenlit the policy of testing passengers on arrival. It has indicated it is considering a one week quarantine instead of two if test results do prove negative.

Another test is also being mooted by the UK and US, involving multiple tests — no timeline currently exists for such an approach.