Healthcare corruption during the pandemic: Turning the crisis into opportunity 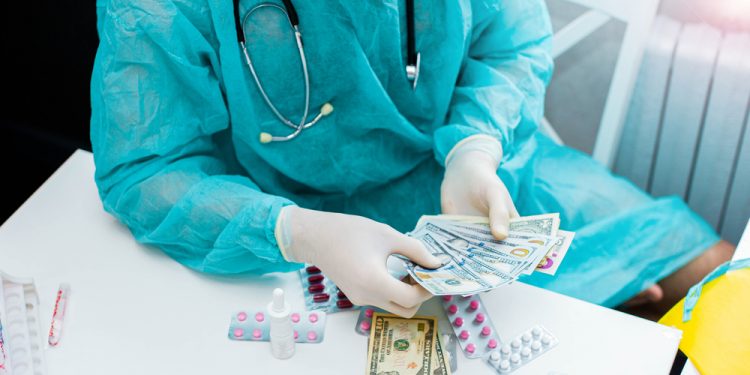 doctor in uniform counts money dollars, a concept of corruption in healthcare. Bribe to the doctor.

Brussels (Brussels Morning) Corruption in the health sector has traditionally been linked with procurement practices, and, in the Global South, with “informal payments” to healthcare professionals as well.

While the global financial crisis may have slowed and reduced such “informal payments”, public procurement, including in the health sector, remains a “field of glory” in corruption.

The value of corruption in public procurement in the EU is an estimated 5 billion euro a year — a black hole in the heart of the bloc and each of its member states.

How easy is it, though, to reduce corruption in public procurement, when such contracts — particularly health contracts — typically involve excess budgets, with the cost of failure for the public tender’s bidder particularly high?

In a scrum to secure such a tender or maximize the contracting company’s financial benefit, ethical business conscienciousness may weaken.

There are repercussions of such corrupt practices. Public administration becomes inefficient from the sub-par quality of dishonest inflated contracting practices.

Monopoly markets develop as potential bidders are unwilling to participate in the tenders, fearing the game is already set. And citizens become exposed to the natural catastrophes and social ills — fire, flood, disease etc. — that public money would ordinarily protect them from.

During the Covid-19 pandemic, corruption remains, but its risks have vastly multiplied as the public procurement of medical equipment occurs under extraordinary and special procedures.

Such casual fraud is not often synonymised with the ‘West,’ but the current crisis has laid bare the pressure facing medics. Intensive care unit (ICU) shortages have forced “life or death” choices on health workers over which Covid patients to admit to ICUs, which could inevitably tempt them to accept a pay-off.

In this context, the UN’s 17 Sustainable Development Goals (SDGs) should be kept in mind. Goal number 16 stresses the establishment of peace, justice and strong institutions, with distinct “sub-goals” — reducing corruption and bribery in all their forms (Target 16.5) and developing effective, accountable and transparent institutions at every level (Target 16.6).

Nevertheless, in times of crisis, such as during the coronavirus outbreak, the risk of corruption in healthcare is exacerbated by dramatically increased pressure on the system.

Distraction, uncertainty and disorientation contribute to an environment in which the corrupt can benefit from the crisis to their advantage. We have already seen numerous cases of unfair practices and mismanagement in public institutions and businesses as a result of the Covid-19 pandemic, which admittedly requires rapid global action.

Therefore, it is important to maintain and extend open data, transparency, integrity, and public participation throughout the health sector and beyond, at all times during the present crisis and hereafter.

Since the onset of the Covid-19 pandemic until today, civil society has shown that this more urgent need for openness and integrity goes beyond the health sector.

The pandemic highlights the importance of accountability and the need for regular and reliable information from our public institutions and leaders, as transparency and cooperation are even more vital during a pandemic.

Civil society has, moreover, underlined that all decisions taken via extraordinary and special procedures must be documented and subject to public scrutiny.

Access to information is crucial so that in the future, there can be accountability for decisions made now. In other words, it is vital that all response measures, including the extraordinary restriction of individual freedoms, be implemented in a transparent, participatory and accountable manner in the public interest. Emergencies do not justify compromise on good governance.

Finally, civil society has called for better protection of whistleblowers during the pandemic. In December, one year will have passed since Li Wenliang, a Chinese doctor working at Wuhan Central Hospital, disclosed to his colleagues the possibility of a SARS-like outbreak, eventually assessed to be the novel Covid-19, encouraging them to protect themselves from infection.

He was later called a whistleblower when his message became public knowledge. As a result, Li Wenliang was summoned to the Public Security Bureau in Wuhan, where he was accused of false statements that disturbed the public order and asked to revoke and refrain from repeating them. The doctor later died from the disease from a patient not known to be infected, in February 2020, at the age of 33.

Li Wenliang sounded the alarm in time, but the Chinese authorities opted to silence the whistleblower instead of flagging his discovery to the world. Would the situation have developed differently if Li Wenliang lived and worked in Europe?

The precedents of whistleblowers in Europe experiencing threats, personal and financial damage, as well as retaliation, does not guarantee a different outcome. However, it is now common ground that whistleblowing is a powerful tool in preventing and combating actions that undermine the public interest. Especially when decisions are made in emergencies, often out of the sphere of democratic control, whistleblowers can serve the vital task of early warning so that accountability is maintained and the rights and freedoms of all people are upheld. It is the safeguard of any society, particularly when what the public needs to know may have life or death consequences.

Justice, transparency and cooperation are vital at any time, but even more so during a pandemic – let’s take advantage of this moment.