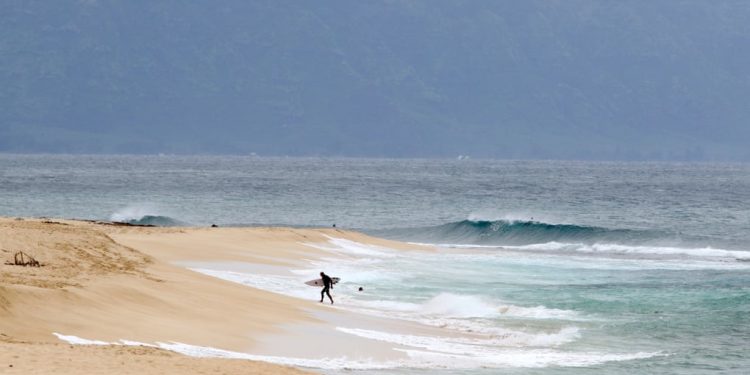 The Sheraton Waikiki stands just a sea-smooth pebble throw from one of Hawaii’s most famous beaches. Working the front desk, Jordyn Wallace loved meeting new people from different states and faraway countries in one of the world’s most beautiful holiday destinations.

Like many Hawaiians, Wallace has been working in tourism since she graduated high school five years ago, and started her front-desk job in December. Then the pandemic came and Wallace lost her job, as Hawaii was forced to make a literally life-changing decision: close down to stop Covid-19 and weather an economic maelstrom unseen in decades.

On 21 March Hawaii’s governor David Ige announced all visitors to the islands must quarantine for 14 days. The flip-flopped travelers disappeared. Stores and restaurants began to close under state shutdown orders. Wallace had her hours dramatically cut, only working a few shifts in April and May before being laid off.

“I have never seen Waikiki so empty. It felt surreal because no matter what time of day it is, you always see visitors in Waikiki,” Wallace said. “We have more than 1,000 rooms. It’s a huge hotel, and to not see a single soul on property was crazy.”

Nearly every state in the US implemented some type of shutdown order to prevent the spread of Covid-19, closing bars, restaurants and gyms and starting a new way of socially distanced life. The shutdowns brought on Depression-level unemployment numbers, the effects of which have lingered even as states reopen their economies.

For Hawaii, being an isolated chain of islands in the middle of the Pacific has proved to be a blessing and a curse. That Hawaii is only accessible by plane or cruise ship has provided the state with a geographic advantage in preventing the spread of the virus. But encouraging people to stay away has severely damaged the state’s economy, which relies heavily on the tourist dollar.

“Every day, there is something on the news that announces businesses are shutting down. These are not new business. They are family businesses, they are institutions, and these are businesses that have survived economic challenges in the past,” said Sherry Menor-McNamara, president and chief executive of the Hawaii Chamber of Commerce.

While other states in the US, such as Florida and Texas, saw huge spikes in Covid-19 cases as state governments worked to reopen economies, Hawaii instead rolled out a policy that deliberately stopped tourism to ensure the health of its residents.

People who break quarantine are subject to arrest and a fine of up to $5,000. Hawaii has been strict in enforcing the rules, arresting nearly 200 people, visitors and residents, since March.

The quarantine, along with other broader travel restrictions implemented around the world, effectively stopped travel to Hawaii. On 1 March nearly 29,000 people arrived. By 31 March that figure had dropped to 301, a fall of 98.9% compared to the same day last year.

Quarantine has helped stop any large outbreaks of the virus. As of 22 July, Hawaii has reported just over 1,400 cases and 25 deaths. In comparison, New Hampshire, which has a slightly smaller population than Hawaii, has had over 6,000 confirmed cases and nearly 400 deaths.

But the combined forces of a statewide shutdown and abrupt pause in the tourism industry has devastated the economy. At least 150,000 workers in the state of 1.5 million people were out of work in May. The unemployment rate was 23.5% – over 10% higher than the national rate.

Hawaii’s online system for filing unemployment claims was so overwhelmed that many had to wait at least a month to receive any payment.

Wallace applied for unemployment in March, once her hours were cut to almost nothing. Right before the pandemic hit, she had just taken out a loan to consolidate some credit card and medical debts. Without payments, Wallace would not be able to make her payments on time, triggering high interest rates.

Her payments finally came in May, after weeks of trying to get answers from the unemployment office. “It was just an absolute nightmare trying to get a hold of their office,” she said.

Jobs started to come back in late May and June, once Hawaii began its slow reopening process. In June, the unemployment rate fell to 13.9%, with about 85,000 people out of work.

But the effects on the leisure and hospitality industry will linger. Last year, 10.5 million visitors spent $17bn when traveling to the islands, with $2bn of that money going directly to the state government.

About $7bn has been pumped into Hawaii’s economy over the past four months from the federal government’s emergency stimulus programs. But that is not enough to make up for the huge shortfall.

State budgets across the country have been devastated by the pandemic. Hawaii will likely prove to be no exception. Earlier this month, Governor Ige said pay cuts for state and local workers, including teachers, are inevitable. The state government will be left short of $1.2bn, according to a report from the University of Hawaii’s Economic Research Organization (UHERO). This deficit is “far worse than those encountered during the Great Recession”, the report said.

Carl Bonham, a professor of economics at the University of Hawaii and executive director of UHERO, said the disproportionate effect the pandemic has had on tourism compared to other industries means the state will be slow to recover from the economic effects.

“Much of the rest of the country will recover faster than Hawaii. Even once there is better treatment or better control of the virus, there will still be lingering effects on air travel,” Bonham said. “Hawaii will be a different place over the next year or so as we have an increase of bankruptcies and failures of businesses. There will be fewer activities for visitors to come to.”

Bonham said more federal aid is the only way Hawaii’s economy can recover. Even with more aid, it will likely be short of money for the next five years, he said.

With Congress at a standstill over giving additional aid to states and local governments, Hawaii’s leaders have been scrambling for solutions that would allow tourists to carefully come back.

Currently, all bets are hedged on a plan that would allow visitors to bypass the 14-day quarantine if they test negative for the virus 72 hours before their flight to Hawaii, and show proof of the negative test. The state is in talks with CVS Pharmacy over a potential partnership to make tests available to incoming travelers.

The plan was originally slated to start 1 August, but the governor pushed the date back to 1 September, citing the surge of infections in other states. While the delay is upsetting to many business owners, eight out of 10 residents in a poll said they believed Hawaii is not ready to open to tourists just yet. And polls show travelers themselves are most willing to take car trips to their vacation destination – rather than a long-haul flight to Hawaii – as it comes with less risk of spreading the virus.

“The best economic policy at this point is really a health policy. It’s controlling the virus,” Bonham said. Tourists “are not going to sit on an airplane for five hours with a whole bunch of people who aren’t wearing masks”.

“If you don’t deal with those issues, it doesn’t matter if the economy is open. That part of the economy won’t really recover.”