Hateful incidents against Americans of color surge amid pandemic 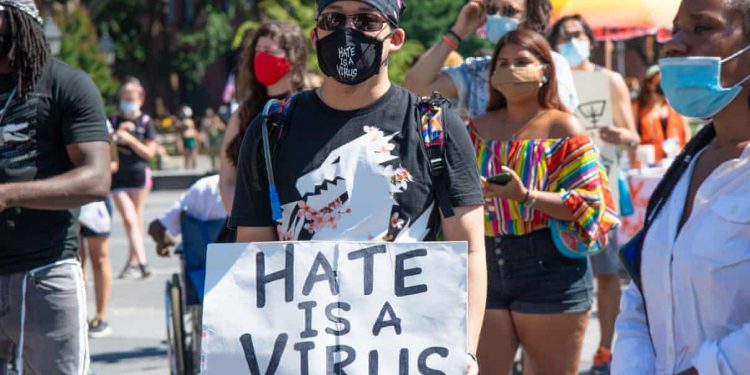 With at least 40 states in the US reporting increasing coronavirus cases, the worsening pandemic continues to have devastating effects on the health and economic outlook for Americans nationwide. But for many communities of color, it has also sparked a racist backlash.

About four in 10 Black and Asian adults reported increased racial tension since the pandemic began, according a survey released this month from the Pew Research Center. Some in Asian communities have reported facing xenophobic attacks, while some Black Americans have reported targeted harassment for wearing masks.

Black and Asian Americans were most likely to report being subject to racist slurs or jokes than their white and Hispanic counterparts. At 31%, Asian respondents reported being the target of slurs or jokes compared to 21% of African Americans, 15% of Latinos and just 8% of white people.

“It’s hard to attribute causality, but what we can say is that many Asian Americans feel they have been subject to slurs or jokes because of their race or ethnicity since the outbreak,” said Neil Ruiz, co-author and associate director of global migration and demography at Pew, told Politico.

“This may be drawing on their own experiences for those people who [say] they know it’s become more common for people to express racist views towards Asian Americans.”

The survey, conducted in early June, also coincides with protests in response to the police killing of George Floyd. Since late May, Floyd’s death sparked nationwide demonstrations calling for racial justice reforms.

African Americans account for a third of all coronavirus cases and deaths, and have not been exempt from a highly politicized coronavirus response. Many advocates have criticized state and federal reopening guidelines that puts Black Americans at higher risk of exposure to the virus.

In New York, for example, the attorney general, Letitia James, called it “inherently wrong to aggressively police one group of people” yet ignore another group that commits the same infraction” in response to reports that mostly white residents who violated the states’ stay at home orders were most times not punished whereas Black and Latino residents received tickets and court summonses.

“[That] deepens the divide between law enforcement and the people they are tasked to protect,” James said in a statement. Similar disparities have been uncovered in states like Ohio, Florida and Hawaii after an investigation by ProPublica.

According to Pew, about three in 10 Black adults under 50 feared someone might threaten or physically attack them, and a quarter had been subject to slurs or jokes since the coronavirus outbreak.

Across the country, organizations tracking racial targeting and hateful attacks reported surges in hateful incidents. Arusha Gordon, associate director of the James Byrd Jr Center to Stop Hate with the Lawyer’s Committee for Civil Rights Under Law, noted increased “flyering” – which is when groups “leave hateful flyers around targeted communities”.

“We have seen huge uptick in tenant-on-tenant harassment or violence, people report being spat on,” she said, noting a rise in calls from particular among Asian women to their hotline for tracking hate.

However, when it comes to the pandemic, she said the link is undeniable.

“We see trends of pseudo-intellectualism on message boards with white supremacists using what is happening with the coronavirus to make unfounded claims of biological superiority or to mock what’s happening to the Black and Asian communities affected,” Gordon said.

While many incidents reported to the hotline or in Pew’s survey are considered hateful incidents, they’re legally not hate crimes. Shouting racial slurs, racist jokes, and threatening deportation areprotected under the First Amendment that guarantees freedom of speech.

Under federal law, hate crimes arelimitedto a “criminal offense against a person or property motivated in whole or in part by an offender’s bias against a race, religion, disability, sexual orientation, ethnicity, gender or gender identity”. Gordon noted not only are they rarely prosecuted, there is no national agency designated to track conviction rates at the national level.

A FBI’s 2019 analysis tracked a 16-year high in hate crimes in 2018. However, the number overall remained steady following a three-year increase after Donald Trump’s campaign and election.

The president has faced mounting criticism for his track record on race, including responses to both the coronavirus pandemic and Black Lives Matter protests. Gordon noted that “much of the racist rhetoric surrounding the pandemic” the center found in white supremacist message boards were “direct insults first hurled or tweeted by the president”.

Rightwing extremism has risen during Trump’s tenure. In just the first weeks of his presidency alone, the Southern Poverty Law Center tallied more than 1,000 incidents of hateful intimidation or harassment. The number of recognized hate or militia groups had also surged.

But Camille Lloyd, executive director of the Gallup Center on Black Voices, contends that while “flash-points of violence and police killings” can shed light on existing racial disparities, it’s the “daily lives and mistreatment” communities of color experience outside of pandemics and uprisings that “lend insight into how prevalent they are”.

The center conducted one of the first comprehensive studies on racist micro-aggressions and found that Black Americans experienced negative treatment by someone of a different race more than any other group in the last 12 months. This included being treated as inferior, assumed to be less smart than a non-Black counterpart, being shown less respect or receiving worse customer service.

“Being a Black adult, you’re three times more likely to have had an experience within the last 12 months when someone insulted you or called you a name,” Lloyd said. “That disparity is an undeniable part of the everyday Black experience.”

A June survey from Pew found most Americans view protests as connected to tensions between Black Americans and police, institutional inequities as well as anger over Floyd’s death. A majority of Americans (nearly two-thirds) said that they support the Black Lives Matter movement and protests for racial justice reforms.

Still, Trump dug in to inflammatory rhetoric last week, referring again to the outbreak as the “China virus”, a term that has repeatedly been denounced as racist, before appearing to falsely tie its spikes to Black Lives Matter protests. Nearly half of all respondents told Pew the president has made race relations worse. That’s down from 56% a year ago.

While the data reinforces disparities that can worsen the effects of a public health crisis, Gordon added the tandem of tracking hate and everyday experiences are critical not just for the residents who rely on the resources and support, but for local and state governments who use tracking databases to shape policy in combatting hate.

“People are impacted by the constant news and data,” she said. “But it allows us to understand what people are experiencing at the local level much more quickly to stop hate where is starts.”