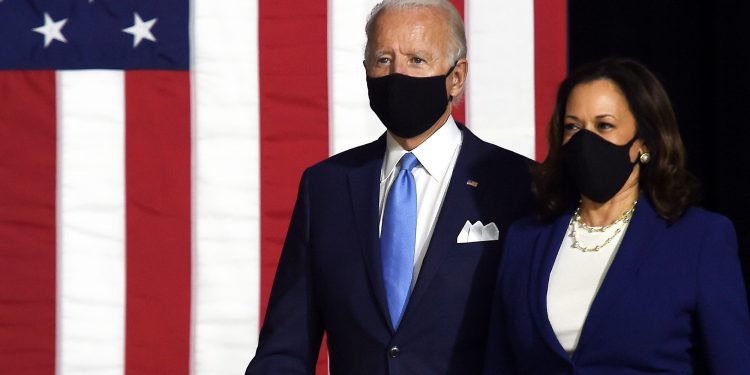 Joe Biden and Kamala Harris accused Donald Trump of leaving the US “in tatters” by failing to lead the country through the coronavirus pandemic and its economic fallout, as they debuted the Democratic presidential ticket the party hopes will defeat him in November’s election.

In their first joint campaign event at a high school in Biden’s home town of Wilmington, Delaware, on Wednesday, the presumptive Democratic presidential nominee and his running mate vowed to lead the nation through three major national crises: the pandemic, the struggling economy and a reckoning with systemic racism.

“My fellow Americans, let me introduce to you for the first time your next vice-president of the United States – Kamala Harris,” Biden said, in front of just a small gathering of reporters. The usual cheers from supporters were missing due to coronavirus precautions, which meant members of the public could not attend.

Biden highlighted her career as a California senator and former prosecutor, and hailed her – the daughter of Jamaican and Indian immigrants – as the first Black woman and first person of Asian descent to join a major party presidential ticket.

“This morning, all across the nation, little girls woke up, especially little Black and brown girls, who so often feel overlooked and undervalued. Today, just maybe, they’re seeing themselves for the first time in a new way,” Biden said.

“Her story is America’s story. Different from mine in many particulars, but also not so different in the essentials.”

The pair soon began to excoriate the Trump administration. Taking the stage after Biden, Harris accused Trump of myriad “failures in leadership” on coronavirus and running a previously successful economy “straight into the ground”.

“I am incredibly honored by this responsibility – and I am ready to get to work,” she said, adding that Biden’s “empathy, his compassion, his sense of duty to care for others … is why I’m so glad to be on this ticket.”

She said: “America is crying out for leadership. Yet we have a president who cares more about himself than the people who elected him. A president who is making every challenge we face more difficult to solve.”

Pointing to the crises that have gripped the country, Harris said: “This is what happens when we elect a guy who just isn’t up for the job. Our country ends in tatters and so does our reputation around the world.”

Biden grew emotional, fighting back tears, as Harris recalled her friendship with his eldest son, Beau, who died of brain cancer in 2015. In his remarks, Biden said his son held Harris in high esteem, an opinion he said influenced his final decision.

Upended by the pandemic

In another election year, Biden and Harris might have appeared before a roaring crowd in a diverse battleground state like Arizona or Georgia, raising their clasped hands skyward in a projection of victory. But the event on Wednesday, like nearly every aspect of the 2020 race, has been upended by the pandemic.

Biden and Harris joined their respective partners, Jill Biden and Doug Emhoff, after finishing their speeches. The couples stood apart on either side of the podium, smiling and waving. Emhoff stretched his hand out toward Jill Biden in a show of affection that was also a sign of the times, as he remained several feet away.

Despite a thunderstorm, dozens of supporters arrived at the high school hoping to glimpse the new presidential ticket. Most lived in Delaware and were longtime supporters of the Bidens. Two women sat in lawn chairs holding a sign that said “Delaware loves Biden-Harris”. Some wore Black Lives Matter T-shirts while others wore the signature green and pink of the Alpha Kappa Alpha sorority, which Harris joined as a college student at Howard University in Washington DC.

Dina Griffin, who wore a pink dress with a matching blazer and a pin that said “VOTE”, said she had hoped Biden would choose Harris but seeing an image of them together for the first time after the announcement brought “tears of joy”.

“A lot of people have lost hope and are feeling upset and depressed about the way this country has gone in the last few years,” said Griffin. “So this moment is just a renewed spark and hope that we can come together to heal our divisions.”

Like Clark Benjamin, a retired educator and Delaware resident, most who turned out on Wednesday had already voted for Biden many times over as senator and then as the vice-president – and planned to do so again in 2020. Though Biden already had her vote, Benjamin said choosing Harris added energy and dynamism to the Democratic ticket.

“It’s historic,” she said, explaining why she chose to spend her afternoon outside in the summer humidity. “That’s why I had to be here.”

But the choice, some said, also revealed something new about the candidate.

“It showed that he was listening to the people who are speaking up around the world and asking for equity, justice and fairness,” said Debbie Harrington, another member of the AKA sorority, referring to the nationwide anti-racism protests sparked by the police killing of George Floyd in Minneapolis in May.

“His pick said: I hear you. And not only did I hear you, I understand you and I’m going to do something about it.”

In response to the wave of protests this spring against racism and police brutality, Harris emerged as a prominent voice on issues of racial justice. Her advocacy in favor of criminal justice legislation has eased some concerns among progressives over her record.

They delivered the speech on the third anniversary of white supremacist violence in Charlottesville, Virginia, an event that Biden said was, for him, a “call to action”.

If they prevail in November, Biden and Harris are likely to inherit a country still reeling from the pandemic that the Trump administration has failed to contain. Young protesters are demanding sweeping change to political and economic power as well as a governing agenda that addresses systemic racism, the climate crisis and economic inequality.

The president’s campaign has launched a scattershot assault on Harris, attacking her as “radical” and leftwing, even though progressives in her party view her as more moderate. On Wednesday, Trump used his press briefing to attack Harris with language that nodded to America’s pejorative “angry Black woman” stereotype.

The US president told reporters he had not watched the pair’s campaign event in Delaware, except for “just a moment” of each speech. But recalling the Democratic primary, he said: “I watched her poll numbers go boom, boom, boom down to almost nothing and she left angry, she left mad.

“There was nobody more insulting to Biden than she was. She said horrible things about him, including accusations made about him by a woman where she I guess believed the woman. Now all of a sudden she’s running to be vice-president, saying how wonderful he is.”

Trump also continued to hammer away at the integrity of the election, in what many see as a tactic to sow distrust in the democratic process. He criticised Democrats for seeking $3.5bn for universal mail-in voting, describing it without evidence as “a system riddled with fraud and corruption”. Five states conduct elections almost entirely by mail and studies have shown the level of fraud is close to 0%.

Trump described Democrats as a bigger threat to the election than China, Russia or Iran, adding: “They also want $25bn additional for the post office, so the post office can handle this vast amount of ballots that are being sent at random all over the place. They have no idea where they’re going.”