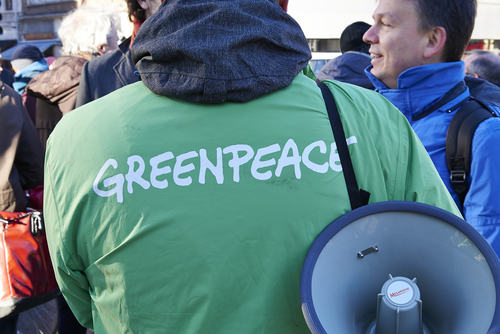 Brussels (Brussels Morning) The EU has been called out for double standards at the COP26 by Greenpeace Europe, the environmental NGO, which described the Union’s stance at the global climate conference as “hypocrisy” and “greenwashing”.

“While in Glasgow, the EU urged the world to take momentous climate action, back in Brussels, EU officials were working hard to keep fossil gas around for decades to come and backed funding for industrial farming and other destructive industries”, Greenpeace EU’s director, Jorgo Riss, declared.

Greenpeace has publicly condemned the EU for supporting fast-track funding for new gas terminals and pipelines. The environmental group also lashed out at the EU for its labelling of gas, nuclear energy and industrial farming as sustainable and therefore eligible for green funding.

As the summit was nearing the end, environmental activist Greta Thunberg described the COP 26 outcomes as “blah, blah, blah”, urging key players to achieve “unprecedented emission cuts at the source”.

The Glasgow Climate Pact that did emerge from COP26 is seen as a compromise deal that offers a political lifeline for accelerating action to keep temperature rise below 1.5C and a roadmap to respond to rising climate impacts.

“The outcome of COP26 is a compromise. It reflects the interests, the contradictions and the state of political will in the world today. It is an important step, but it is not enough”, said the UN Secretary General António Guterres.

Portrayed as a global leader in climate action, the EU pledged 1 billion euro to tackle deforestation during the COP26. On 2 November, the Union also announced a Just Energy Transition Partnership with South Africa and officially launched a joint pledge with the US to tackle methane emissions — a commitment listing more than 100 countries. Investments on clean technologies, in partnership with Bill Gates and the European Investment Bank, were also reiterated during the summit in Glasgow.

“The glass is definitely more than half full, but there is still a lot to do. While it is very positive that all now accept climate neutrality, it is a big problem that there is too little ambition until 2030”, MEP Peter Liese (EPP) observed on the last day of the Climate Summit.

Notwithstanding the EU commitments, Greenpeace called the EU’s plans to facilitate more deforestation a “major blow” to the the EU’s Green Deal and its “credibility as a climate leader”.

“EU trade officials are trying to water down a future law to ban products linked to deforestation from the EU market. All this reduces the chances of limiting global heating to 1.5°C even further”, Greenpeace director Riss complained.

“Despite committing to high ambition, the EU struggled to build bridges with the US, China or small island states across North-South divides. In the final moments, the EU benefited from the responsible action of small island states, joining them in holding the line on an outcome that keeps 1.5 in reach”, E3G Senior Policy Advisor Jennifer Tollmann said.

On the very last day, a commitment to phase out coal was watered down after India and China led opposition to it. In the end, countries agreed on “phasing down” instead of “phasing out” coal. The Parliament remains concerned with China’s lack of commitment in becoming CO2-neutral before 2060, a timeline MEPs considered as being “clearly too late”.

“There is still a huge amount more to do in the coming years. But today’s agreement is a big step forward and, critically, we have the first ever international agreement to phase down coal and a roadmap to limit global warming to 1.5 degrees”, the UK’s Prime Minister Boris Johnson declared, as the two weeks of high-level meetings concluded on November 13.