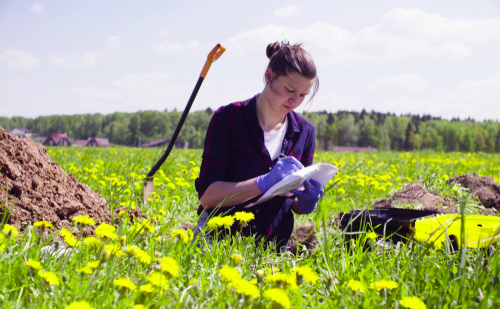 Scientist ecologist on the meadow writing something on the envelope.

Brussels (Brussels Morning) Greek environmentalists are up in arms over government plans for a wind farm project, which, they say, would destroy tracts of ancient forests, Reuters reports.

The informal group stresses that hundreds of trees would be destroyed in the process of building 100 wind turbines with a combined output of 470 MW as part of Greece’s green push.

Government energy adviser Alexandra Sdoukou asserts that, after years of lagging behind climate and energy targets, the authorities now seek “to be among Europe’s champions in the green transition”.

Greece has tripled its wind energy capacity since 2010 by building wind turbines on mountains and in coastal areas where strong winds prevail.

Now, as it looks to step up its pursuit of renewable sources of energy in its bid to meet EU environmental goals, the latest planned project includes the construction of wind turbines on the island of Euboea.

With hundreds of wind turbines already built on the island, local authorities have cautioned the government that it is pushing too hard and that this is neither appreciated nor supported within local communities.

Deputy prefect of Euboea George Kelaiditis observed that “we are not trying to fight with the government nor are we against investment. We just believe that the way this is being developed it is badly planned”.

Critics of the project note that the south of Euboea relies on agriculture and tourism, whereas the planned wind farm project threatens to turn the area into an industrial zone.The Greek government insists the green push is not being forced on the locals. However, Athens does remain under severe pressure to develop the country’s renewable energy infrastructure in order to meet the EU’s climate goals as quickly as possible.