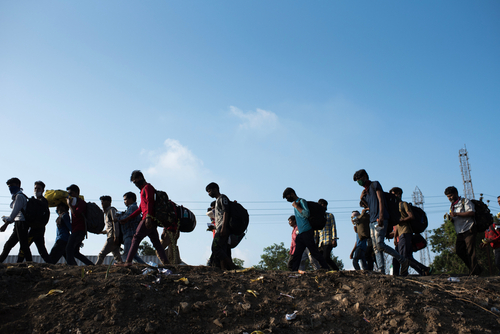 Brussels (Brussels Morning) Greece’s Ombudsman issued a report on Thursday noting that the authorities have failed to respond adequately to repeated allegations of summary deportations of migrants along the Greek-Turkish border, Reuters reported.

The Ombudsman’s investigation covers a period between 2017 and 2020. It deals with the activities of Greek police and security services along a 190-kilometre stretch of land border between Turkey and Greece, which is mostly formed by the Evros River.

The report notes a consistent pattern in the accounts that have emerged, most of which were based on testimonies collected by local and international human rights groups. “Most complaints of illegal pushbacks indicate a standard practice” the re[port states..

A typical testimony claims that a group of migrants gets intercepted by the police and  their mobile phones and personal identification documents are taken from them. The detained group is then handed over to unidentified men, usually in blue uniforms.

After remaining in their custody for several hours, other unidentified men in black uniforms march them to the Evros River, where they force them to embark on dinghies, and drag them over to the Turkish side.

The Greek Ombudsman noted that its office lacks the resources to investigate the claims directly. It called on the government to respond to the multiple detailed allegations of pushbacks, which deny migrants the right to seek asylum.

The report’s findings echo nearly identical reports and testimonies made by migrants attempting to cross the Bosnian-Croatian border, where Croatian police have refused to provide requested documentation to the Ombudswoman.
Visiting Lipa refugee camp in Bosnia in February, EU Home Affairs Commissioner Ylva Johansson told reporters that the EC is in close contact with Croatian authorities and will be working on establishing a monitoring mechanism which should prevent such violent pushbacks from taking place.