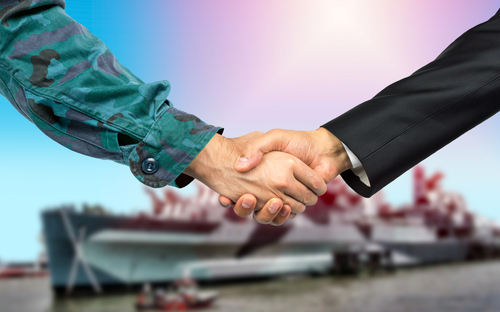 The new deal is the first major contract for the French state-owned Naval Group shipyard since losing the contract with Australia for producing a fleet of diesel-powered attack submarines. The French shipyard is to build three latest-generation surface combatant ships for Greece, with an option to extend the contract to include more.

Speaking at a joint press conference on Tuesday, Macron urged Europeans to “stop being naive”, as he called for greater European autonomy from the US in matters related to defence policy. “When we are under pressure from powers, which at times harden their stance, we need to react and show that we have the power and capacity to defend ourselves”, Macron declared.

Greece previously partnered with France last year in a 2.5 billion euro contract for the procurement of 18 Dassault Rafale fighter jets. Satisfied with their purchase, Mitsotakis announced this month that Greece plans to buy a further six Rafale jets from France. On Monday, he stated that Paris and Athens have been engaged in further talks to strengthen their defence cooperation.

“This will tie us for decades,” he said on Tuesday. “This opens the door to the Europe of tomorrow that is strong and autonomous, capable of defending its interests.” Greece has been facing mounting tensions with Turkey in recent years, culminating last summer with the two countries continuing to disagree over the demarcation of their maritime borders and seafloor exploitation rights.

Asked if the latest Greek military procurement might not add to tensions in the region, Macron stressed that the deal did not target any country in particular, but rather served to bolster Greece’s defence capacity, which represents the outer border of the European Union.

“I don’t get the feeling that in the summer of 2020 it was Greece that was bellicose in the eastern Mediterranean”, the French President observed. “As Europeans it is our duty to show solidarity with member states.”. It was legitimate to commit to equipping them so that they can protect their territorial integrity against intrusions, attacks and aggressions, he added.