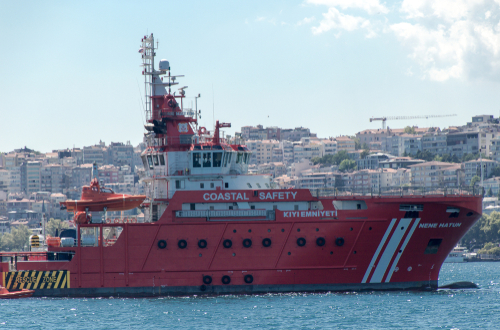 A Turkish Coast Guard ship sails near Istanbul. Disputes over Mediterranean oil and gas exploration have put Turkey into conflict with its neighbors, especially Greece.

Brussels (Brussels Morning) Greece will respond to Turkey’s invitation to resume talks over the two countries’ disputed territorial claims in the Mediterranean, but will not accept discussion on matters it considers as sovereign rights, Reuters reported on Wednesday.

Turkey’s Foreign Minister Mevlut Cavusoglu invited Greece earlier this month to return to the negotiating table and continue holding the so-called exploratory talks, which were halted in 2016.

Greece’s Prime Minister Kyriakos Mitsotakis acknowledged the invitation and expressed optimism over the call, hinting at a possibility that the dispute over territorial claims, which nearly resulted in the two countries coming to blows last summer, might de-escalate.

On Wednesday, Mitsotakis confirmed that Greece will return to talks “in hopeful spirit”, but made clear that its negotiators will not discuss any issues that the country considers to be part and parcel of its sovereign rights.

The exploratory talks, which are informal and non-binding, were initiated in 2002 in an attempt to come to an agreement over jurisdiction and maritime zones in the eastern Mediterranean,. When they were abandoned in 2016, some 60 separate meetings had been held. Now that they are finally resuming, the 61st is to be held in Istanbul on 25 January.

They were to have resumed last year, but were abandoned as tensions built up after Turkey sent a survey vessel into waters Greece considers to be part of its continental shelf. Another problem that is expected to resurface concerns agreement on just which topics are to be covered in the talks.

Reportedly, Greece only wishes to address the demarcation of maritime zones in the Aegean and eastern Mediterranean seas, while Turkey also wants to discuss airspace jurisdiction, as well as the status of some Aegean islands.