Greece not backing out from Belt and Road Initiative 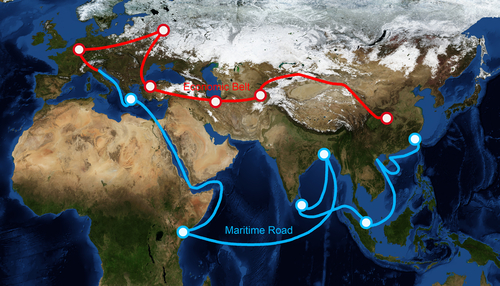 One belt one road route map, The map image furnished by NASA

Brussels (Brussels Morning) Greece’s Permanent Representative to NATO Spiros Lambridis noted on Monday that Athens is not planning to back out from China’s Belt and Road Initiative.

“We strategically opt for the best possibilities for our own country, again always within our obligation with the main organisations, the EU and NATO”, he pointed out. Greece, he added, would not sever economic ties with China just because other EU and NATO members are, CNBC reported on Monday.

Lambridis stressed that Greece does not see its participation in the Chinese initiative as a strategic relationship, noting “we have joined the Belt and Road Initiative in a very concrete project”.

China’s relations with the EU have deteriorated since the bloc decried the Chinese Communist Party’s (CCP) treatment of the Uyghur minority in Xinjiang Province in March this year. The CCP rejects the accusation that it violates the human rights of the minority.

Over the weekend, the G7 agreed to urge China to “respect human rights and fundamental freedoms”. Responding, the Chinese Embassy in the UK insisted that a small group of countries cannot interfere in the internal affairs of other countries.

China has made several major investments in Greece, mostly in real estate and energy. In 2016, the Chinese shipping company COSCO took over the Port of Piraeus, one of the busiest ports in Europe.

“If we analyse that there is a threat out of that relationship, we will reconsider”, Lambridis stated. “But at this point, all that we are getting out of this are the benefits of a healthy and very legitimate commercial relationship.”

Besides criticising China, the G7 agreed over the weekend to launch a competing initiative to invest in infrastructure in poorer countries. Critics point out that the Belt and Road Initiative serves to strengthen the CCP’s international influence, pushes poorer countries into debt and boosts China’s economy.