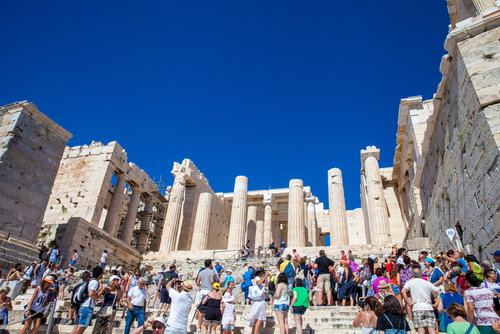 Brussels (Brussels Morning) Greece marked the formal start of its tourist season on Thursday by announcing a multi-million euro promotional campaign aimed at salvaging its primary economic sector from another summer lost to the coronavirus pandemic, Reuters reported.

Tourism is the single most significant contributor to the Greek economy and its main export product, with one in five Greeks employed in the sector. It accounts for nearly 20% of the country’s economic output. Tourism-related revenues dropped more than 75% in 2020, down to some 4 billion euro compared to a whopping 18 billion in 2019.

The country has no option but to pin most of its economic recovery hopes on reviving the crucial tourist season this year. “We are opening our tourist industry to the world,” Tourism Minister, Haris Theoharis, announced at a news conference that was held in front of the Temple of Poseidon outside Athens.

The country has prepared a series of promotional videos addressing stressed workers all over Europe and telling them that “All you want is Greece”. The message from Athens is aimed at potential tourists coming from Britain, the EU and a number of other countries, including Israel and the US. All visitors are welcome provided they have either been vaccinated or can present a negative test result for COVID-19.

Quarantine rules in some of its target markets, however, present a major concern for Greece. Tourists arriving from Germany and Britain, for instance, will be forced to stay in quarantine on their return home from vacation. This means significantly fewer visitors from those countries. Despite his optimism, Theoharis refused to offer predictions for this year’s tourism revenues. The best he could say was that “it will be better than the last year”.