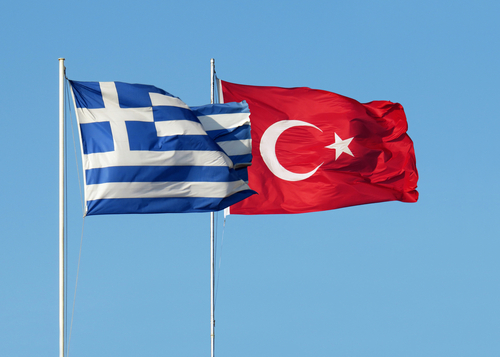 Greece and Republic of Turkey are the two neighboring countries flags

Brussels (Brussels Morning) Greece and Turkey continued discussions on their maritime border demarcation dispute in Athens on Tuesday, according to Reuters reporting.

The two NATO allies have been at loggerheads over border demarcation in the Mediterranean, air space claims, the status of some Aegean islands and the division of Cyprus for years.

They are seeking common ground on these long-standing disputes ahead of the EU summit scheduled to take place later this month.

While the talks are aimed at setting the stage for formal negotiations on open issues, the fact is that Greece and Turkey have made very little headway since 2002 and are having a difficult time agreeing as to which issues to discuss.

Earlier this week, Turkey objected to the EuroAsia Interconnector project recently announced by Cyprus, Greece and Israel, as they plan to connect their energy grids with a submarine cable. Turkey’s state-run Anadolu news agency pointed out that the planned route of the submarine cable passes through Turkey’s waters.

The latest talks in Athens lasted close to four hours, with the two sides agreeing to continue the talks in Istanbul, according to Greece’s national broadcaster ERT. A meeting between Greek and Turkish officials outside the exploratory framework is slated for later today.

The talks were revived in January after a five-year hiatus and come on the heels of months of friction between the two sides in the Eastern Mediterranean over hydrocarbon exploration.

Greece indicated it was prepared to discuss border demarcation issues in the Eastern Mediterranean and the Aegean Sea, but made clear it would not talk about issues of “national sovereignty.”

Turkey said it wants to discuss all open issues, including the status of some islands in the Aegean Sea. Ankara wants to improve its relations with the EU, which has been supportive of member state Greece and has threatened to impose sanctions against Turkey.

The EU plans to review the situation in the Eastern Mediterranean at its upcoming summit.