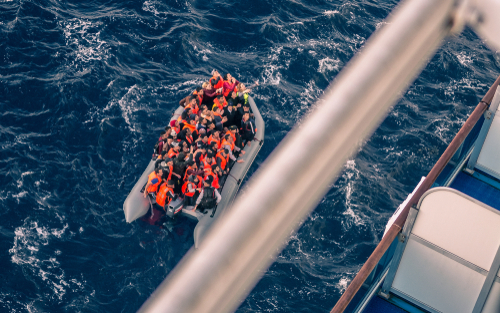 Greece’s Minister of Migration and Asylum, Notis Mitarachi, said that, according to the Hellenic Coast Guard, Turkish security forces had accompanied migrant boats “to the border of Europe, in an effort to provoke an escalation”.

“It is beyond doubt that these migrants departed Turkish shores, and given the fact they were supported by Turkey, were not at risk”, Mitarachi noted and concluded “we call on Turkey to stand down and stop this unwarranted provocation.”

Ankara rejected the accusation, with Turkey’s Deputy Interior Ministerm, İsmail Çataklı, accusing Mitarachi of lying and painting an inaccurate picture of the events.

Instead, he claimed that Greece had pushed back 231 migrants on Friday and that it was Turkey that had rescued them.

“That’s a crime against humanity to slander the Turkish Coast Guard saving people you left to death”, Çataklı asserted, adding, “that’s typical of you”.

According to the Hellenic Coast Guard, in one incident on Friday, a migrant boat tried to enter Greek waters accompanied by a Turkish Coast Guard vessel.

In a separate incident on Friday, two Turkish vessels accompanied a migrant boat into Greek waters, while in a third incident, a Turkish vessel entered Greek waters off the island of Lesbos, according to the Hellenic Coast Guard.

Friction between Greece and Turkey

Tensions between Greece and Turkey increased in 2020 when thousands of migrants from Turkey amassed at the border with Greece.

Mitarachi called on Ankara to fulfil its obligations under the deal.