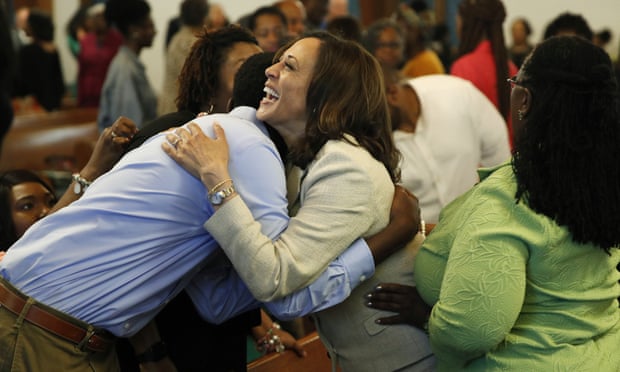 Democrats from all corners of the party appeared largely united behind Joe Biden’s selection of the California senator Kamala Harris as his running mate on Tuesday.

The responses came almost immediately after Biden unveiled Harris as his choice for the vice presidential nominee, less than a week before the Democratic national convention, where Biden will be formally nominated as the presidential candidate for his party.

“I’ve known Senator @KamalaHarris for a long time. She is more than prepared for the job. She’s spent her career defending our Constitution and fighting for folks who need a fair shake,” Barack Obama tweeted. “This is a good day for our country. Now let’s go win this thing.”

Hillary Clinton said she was “thrilled to welcome” Harris to the ticket. “She’s already proven herself to be an incredible public servant and leader,” the former presidential candidate tweeted.

Harris had been one of Biden’s rivals for the Democratic presidential nomination until she dropped out of the race late last year, but both would be considered center-left, though Harris has cultivated some more progressive credentials. While she was often criticized as too much of a centrist and establishment candidate, as Biden was, praise also came from high-profile progressive leaders on Tuesday, including two of Biden’s other former rivals, the senators Bernie Sanders and Elizabeth Warren.

“Congratulations to @KamalaHarris, who will make history as our next Vice President,” Sanders tweeted. “She understands what it takes to stand up for working people, fight for health care for all, and take down the most corrupt administration in history. Let’s get to work and win.”

Warren, who had been in the running to be Biden’s running mate, tweeted that Harris would be a “great partner” to Biden “in making our government a powerful force for good in the fight for social, racial, and economic justice.”

The liberal group Democracy for America (DFA), which had endorsed Sanders for president this year before he dropped out, also expressed support.

“Vice President Biden’s selection of Senator Kamala Harris gives Democrats an historic opportunity to defeat Donald Trump, break through a glass ceiling for Black women, and win majorities in both the House and the Senate that can deliver the bold progressive reforms we need to restore America,” the group’s CEO, Yvette Simpson, said in a statement.

“Joe Biden made a powerful choice in Harris: a woman of incredible accomplishment, a fighter for our democracy, and a compassionate and empathetic leader,” she added.

The Michigan congresswoman Rashida Tlaib, a progressive who has not endorsed Biden, tweeted: “I’ve fought alongside Senator @KamalaHarris for direct cash payments during the pandemic and for clean water as a human right. Now let’s defeat Trump and make those policies a reality.”

The progressive New York congresswoman Alexandria Ocasio-Cortez was more muted in her reaction, reportedly telling USA Today that Harris “complements [Biden] really well” and “rounds out his ticket”. Harris “is aligned with him on quite a few issues”, she said.

During the presidential primaries, one of the main criticisms of Harris was that she did not clearly define her positions. On healthcare, for example, she co-sponsored Sanders’s Medicare for All bill and said she favored eliminating private healthcare, before later unveiling a healthcare plan that kept a significant role for the industry.

Harris has been a prominent voice on racial justice. But her record as California’s “top cop” has also drawn scrutiny from progressives over her approach to police reform, prisoners’ rights and truancy among other issues.

Critics had generally preferred one of the other finalists in Biden’s deliberations process for Biden’s running mate. While Warren was the favored potential running mate among the liberal wing of the Democratic party, others advocated for former Georgia state representative Stacey Abrams.

But Harris fulfills a major requirement among some progressive Americans: that he pick a woman of color.

And among the many candidates mentioned by Biden himself, or anonymous Democratic operatives in articles gaming out his choices, or pundits, there was no single person who would satisfy all the interest groups and sectors of the Democratic party.

Donors for Harris, Biden, and other former presidential candidates said Harris’s qualifications were undeniable and she would breathe extra life into the Biden campaign.

“Phone has blown up. People are fired up. The historic nature of it but also she’s a great campaigner who will help us win. She’s already gone thru primaries and is known,” a Harris campaign donor said in an email to the Guardian.

Ami Copeland, a former national finance director for Obama’s first presidential campaign, said she did not “anticipate too much blowback” from Harris’s nomination. “Stakes are too high and it’s not 2016,” she said.

Republicans, meanwhile, were eager to falsely paint Harris as a radical leftist, despite many in her own party seeing her as a centrist. At a press conference Tuesday afternoon Donald Trump said: “So she did very poorly in the primaries and now she’s chosen, so let’s see how that works out.”