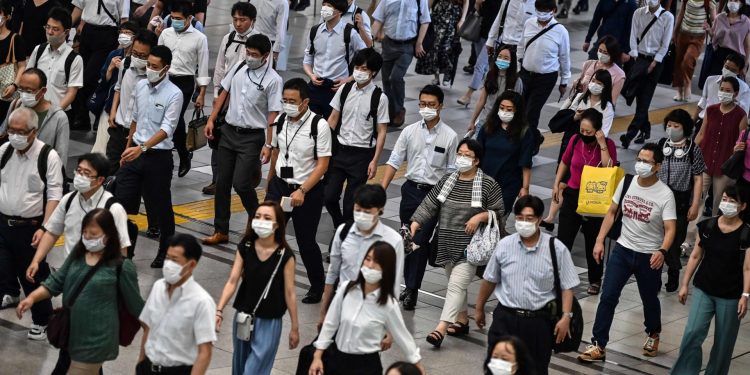 Japan’s economy has been hit by the worst economic contraction in its modern history as the coronavirus pandemic closed businesses and buffeted consumer spending. It came as New Zealand postponed its general election for a month as its Auckland Covid cluster grew and Australia suffered its deadliest day of the pandemic.

Gross domestic product in Japan shrank a record 7.8% in April-June, which equates to an annualised rate of 27.8%, marking the biggest decline since comparable data became available in 1980.

It will put further pressure on policymakers to take bolder action to prevent the country’s recession deepening. It was the third straight quarter of contraction and a bigger decline than a median market forecast for a 27.2% drop.

Private consumption, which accounts for more than half of Japan’s economy, fell 8.2% for the quarter, bigger than analysts’ forecast of a 7.1% drop. Capital expenditure declined 1.5% in the second quarter, less than a median market forecast for a 4.2% fall.

External demand, or exports minus imports, shaved 3.0% off GDP, as the pandemic dampened global demand, the data showed.

While the economy had largely re-opened after the government lifted the state of emergency in late May, a worrying resurgence of infections muddied the outlook for business and household spending.

Other powerhouses of Asia’s economy have also struggled to bounce out of the pandemic. Singapore last week reported its virus-affected economy shrank almost 43% in the second quarter, in a sign that the country’s first recession in more than a decade was deeper than initially estimated.

In New Zealand, the government postponed the general election due on 19 September until 17 October, citing concerns over the coronavirus cluster in Auckland, which now numbers 58. The country had gone 102 days without a case of community transmission, but that was shattered last week when four people in the city were found to have the virus.

The prime minister, Jacinda Ardern, said she had factored in participation of voters, fairness and certainty in her decision to delay the vote. She also said the date would not be moved again.

A local poll released on Monday suggested 60% of New Zealanders did not think the original September date should stand. Authorities are yet to identify the origin of the outbreak in Auckland.

Australia reported its deadliest day of the pandemic on Monday, with 25 deaths in the southern state of Victoria, which has been particularly hard hit by a substantial outbreak of the virus. All but three of the victims were linked to outbreaks in aged care homes. More than 300 people have now died since the beginning of this outbreak in June.

A small piece of better news was that the number of new cases seemed to be holding at lower levels, with 282 new infections reported on Monday.

In total more than 400 Australians have now died from Covid-19, with growing concern about the virus’s impact on mental health. Local news reports suggested there had been a 33% increase on Victorian children and young people presenting to hospital with self-harm injuries over the past six weeks compared to the previous year.

Experts say India needs to ramp up testing further to get the virus under control as it spreads to rural and regional areas where healthcare systems are particularly fragile or not easily accessible.

Italy has closed its nightclubs from Monday for three weeks and made it compulsory to wear a mask outdoors in some areas between 6pm and 6am.

It’s the first reintroduction of restrictions as cases rise, particularly among young people. Cases have double in three weeks and the median age of those affected is now below 40.

“We cannot nullify the sacrifices made in past months. Our priority must be that of opening schools in September, in full safety,” Health Minister Roberto Speranza said on Facebook.