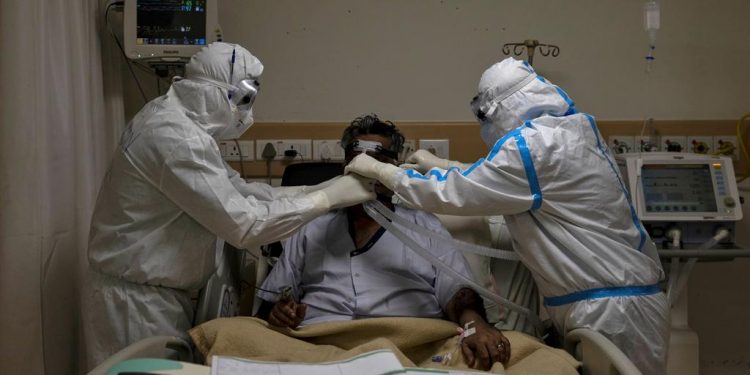 India’s health ministry reported 77, 266 new cases on Friday. The largest ever one day rise is 78,427, reported by the US on 25 July. India also recorded more than 1,000 new deaths taking total fatalities, to 61,529, the fourth highest total in the world, behind the US, Brazil and Mexico.

The worst affected part of India is the western state of Maharashtra, home to the country’s financial centre, Mumbai. The state has recorded more than 23,000 deaths.

It came as Donald Trump wrapped up the Republican convention in the US suggesting a vaccine could be available before the end of the year “or maybe even sooner”, but Washington University warned 317,000 Americans could die from the virus by 1 December.

President Trump lauded his administration’s handling of the virus at the Republican convention’s final night in front a large crowd who sat close together, mostly without face masks. Trump said to “save as many lives as possible, we are focusing on the science, the facts and the data”.

There was no mention of the US’s 180,000 death toll, or the 5.8m infections, as Trump recounted what he saw as the US’s successes on fighting the virus, including the familiar refrain of stopping flights form China and Europe months ago.

He suggested a vaccine may be available in 2020 and criticised his presidential opponent:“Joe Biden’s plan is not a solution to the virus, but rather a surrender,” Trump said.

On Thursday, the University of Washington expanded its forecast on US virus fatalities, projecting more than 317,000 deaths in the United States by 1 December.

The new forecast, by the university’s Institute for Health Metrics and Evaluation reflected an increase of about 8,000 deaths from its previous forecast. However, the report also suggests that if 95% of Americans wore a mask, the death toll could be reduced by about 67,000 lives.

The IHME’s projections have been cited in the past by the White House and are watched closely by public health officials.

Europe meanwhile, faced rising infections and from Friday morning, all Parisians pedestrians had to wear face coverings. Cyclists and those using other open-air transport were included in the new directive, but not people in cars.

The new restriction followed the government’s announcement that 21 of 101 French administrative regions, or departments, were now in the red zone where the virus was actively circulating, and where local authorities could impose stricter rules on gatherings and movements.

The Tour de France was reported to be in doubt after the race’s starting region, the Alpes-Maritimes, was included in the red alert.

On Thursday France reported its second-highest level of cases ever and a new post-lockdown high, with 6,111 cases. The highest daily total of 7,578 was set on 30 March.

Meanwhile, Spain announced schoolchildren aged six and over must wear masks to class, just days before the start of the new academic year.

Asked whether concerned parents would have the right to keep their children at home, education minister Isabel Celaa said schools were safer than other places.

“It is mandatory to go to class. For anyone who is afraid, I must say that we have been working since day one for a safe environment,” she said, acknowledging there was no place with “zero risk.”