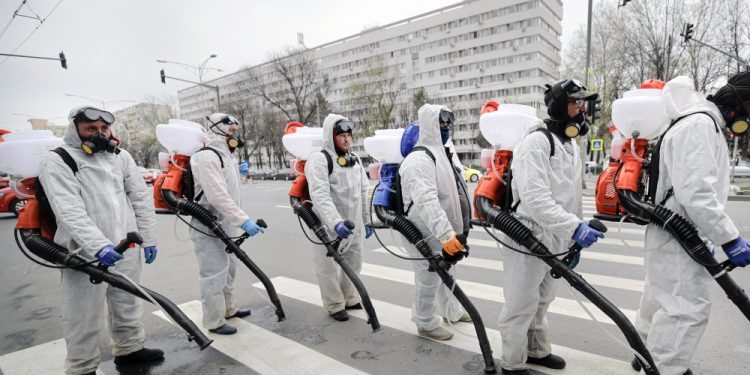 The current number of confirmed infections stands at 19,792,519, according to data from Johns Hopkins University, with total new cases daily averaging more than 250,000.

The bleak milestone approached as Australia recorded its deadliest day of the pandemic, with 19 deaths. The nation is dealing with an outbreak in its second largest city, Melbourne, where authorities have struggled to contain the spread of the virus, which began in quarantine facilities.

Metropolitan Melbourne is one week into a strict lockdown expected to last until 13 September, with the rest of the state of Victoria under stage-three restrictions. On Monday, the state saw its biggest decrease in the number of new daily cases – at around 300 after highs of 700 – with Premier Daniel Andrews saying the drop could signify “greater stability that is a result of the cumulative impact of stage three.”

Australia is among several countries which had appeared to have controlled the virus, but are battling fresh outbreaks.

Global coronavirus cases have doubled in just six weeks, and have risen 200-fold since mid-March. Deaths have increased from more than 4,000 globally at the time of the WHO declaration to more than 730,000 now.

The United States, which on Sunday passed 5m infections, accounted for a quarter of the global case total and one in five deaths worldwide. It is the worst-affected country in both the number of cases and fatalities.

One in every 65 Americans has tested positive for coronavirus, while one in 2,000 has died from Covid-19 since the start of the pandemic.

Brazil, with over 3m infections, is the next worst-affected. On Sunday, the country passed its own sombre milestone, as the death toll climbed past 100,000.

Both the Brazilian president Jair Bolsonaro and the US president Donald Trump have in the last five months sought to downplay the danger of the virus, with Bolsonaro calling it “a little flu” and Trump repeatedly promising the disease would disappear under his leadership.

Last week, Trump repeated that he believes coronavirus will “go away”, despite his top public health expert, Dr Anthony Fauci, warning that it could take most of 2021 or longer to get the pandemic under control and that it is “unlikely” the virus can ever be eradicated.

Meanwhile in China, the country where the virus first emerged in late December 2019, new locally transmitted cases fell to just 14 in the past 24 hours, the National Health Commission reported on Monday. The low figure was offset, however, by 35 cases brought into the country by Chinese travellers from overseas arriving in seven different cities and provinces across the country. All the cases of local transmission were in the northwestern region of Xinjiang, whose main city Urumqi is the centre of China’s latest outbreak.

There are now 29 countries with higher cases than China, which has 88,793 confirmed infections and fewer than 5,000 deaths.

Britain, which has 312,574 cases and the fourth-highest number of deaths globally, with 46,659, saw cases rise by 1,062 on Sunday, going over 1,000 for the first time since late June. As cases rose in the country, new local lockdowns have been implemented in some areas and worries over a second wave of infections were rife.

Here are the other key developments from the last few hours: