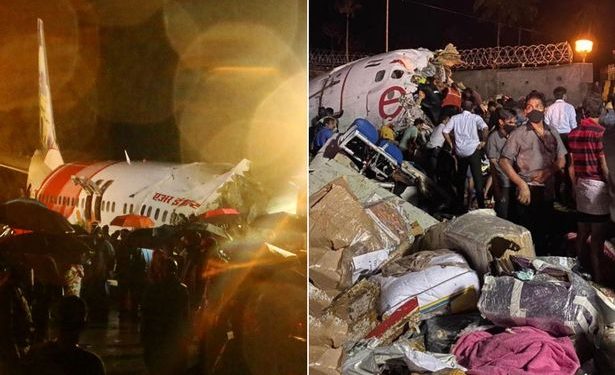 A three-year-old girl has been rescued from an Air India plane that crashed with 191 people on board.

At least 18 people died in the incident, including both pilots, aviation officials said.

A senior government official added 16 people have been severely injured.

A broadcast by Times Now News showed a photo of a little girl who was rescued after the crash.

A man can be seen holding the little place crash survivor in his arms.

The flight was repatriating Indians stranded by the coronavirus crisis when the incident took place yesterday.

The Directorate General of Civil Aviation has ordered a detailed inquiry into the matter, according to Times Now News.

“The  @FlyWithIX  flight number AXB-1344 on its way from Dubai to Kozhikode with 191 persons on board, overshot the runway in rainy conditions & went down 35 ft. into a slope before breaking up into two pieces.

“We are in touch with local authorities. State police have reported 11 deaths. Relief teams from Air India & AAI are being immediately dispatched from Delhi & Mumbai.

“All efforts being made to help passengers. A formal enquiry will be conducted by AAIB.”

The aircraft crashed at 7.40pm local time (2.10pm BST) on Friday, as it attempted to land for a second time at Calicut International Airport.

Rahul Gandhi, who is an MP for a district in Kerala, said he was “shocked at the devastating news of the plane mishap in Kozhikode”.

In May 2010, 158 people died when an Air India Express flight overshot Mangalore airport runway and crashed.

A similar incident happened in July 2019 in Mangalore, prompting an inquiry, but causing no fatalities.