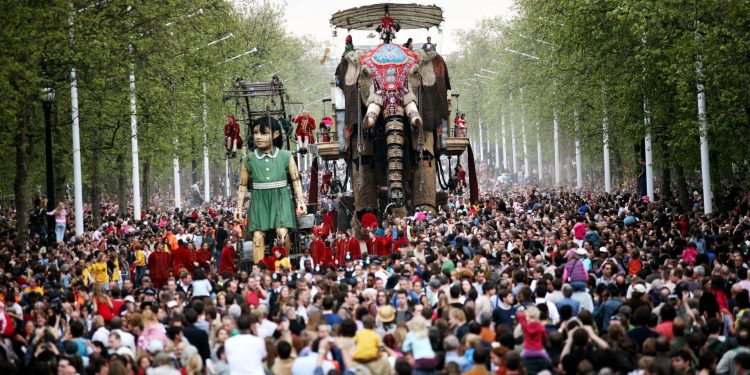 It’s 3 May 2006, the night before the now legendary performance of The Sultan’s Elephant by French company Royal de Luxe. Nicky Webb, the co-founder of Artichoke, and I are standing in the Mall in London, watching the unending parade of taxis, bikers and joggers grind their way homeward. “Do you think anyone will come?” we mutter anxiously.

For us, it had been a seven-year journey of negotiating with public authorities, who initially described the prospect of the show as an “infringement of the dignity of the ceremonial route”. In the end, this gigantic, groundbreaking piece of street theatre – in which a mechanical elephant three-storeys tall trundled and trumpeted its way through the capital and a time-travelling plot – took London by storm and changed the official view of what constitutes great art.

Breaking free of the confines of theatres, galleries and concert halls, for four days The Sultan’s Elephant used the streets as its stage and the city as its scenery. And the million-strong audience, thinking themselves there simply to view the event, became participants in a joyous occupation of the streets.

Fast forward to 2012 and director Danny Boyle recruits a cast of 10,000 for his Opening Ceremony for the London Olympics. And again to 2017, when thousands of volunteers paint themselves blue for Spencer Tunick’s Sea of Hull, as part of its UK city of culture programme. Over the past 20 years, events such as these have embedded themselves in our cultural psyche, creating transformational moments that live long in the memory for those taking part and for those who bear witness.

So will it matter, in our new Covid-19 world, if events like these can no longer take place, if mass gatherings are subject to fines and arrests as we live out our days in the solitude of our Zoom-connected bedrooms? If cultural experiences are once again returned to the confines of theatres and galleries, made ever more exclusive by the requirements of social distancing?

Admittedly, we have a refreshed digital culture, with increased numbers accessing online performances. But culture mediated through a screen can never replace the feeling of being part of something big, whether it’s in a field at Glastonbury with thousands of others, or collectively reliving the Great Fire of London as a 120-metre replica of 17th-century London spits flames into the night sky above the Thames.

Official guidance from the government admits that “the risks of transmitting the disease at mass gatherings are relatively low”, but that banning such events will “allow emergency services that would have been deployed for these events to be prioritised in alleviating pressure on public services”. Recent spontaneous BLM demonstrations haven’t produced serious spikes in infection, but it’s the optics that look wrong. By keeping us all locked away, we can be persuaded that the act of congregation is a risky business.

But do mass participation events have to be feared as the 21st-century equivalent of mob rule? Think of Jeremy Deller’s inspirational We’re Here Because We’re Here, commissioned by 14-18 Now, in which hundreds of performers invaded public spaces in ones and twos, dressed as their first world war ancestors. Tragic young men in military uniform silently importuned passersby in a moving act of political theatre.

Our own Processions, commissioned by the same organisation, created giant moving stripes of colour with women dressed in the green, white and violet of the suffragettes. Somewhere between a commemoration and a celebration, the event on 10 June 2018 saw thousands of women congregate in Belfast, Cardiff, Edinburgh and London. It was a powerful reclaiming of the streets.

Meticulously organised, carefully stewarded, with numbers controlled at every turn, Processions was a demonstration of how a demonstration could be run. What also mattered to those taking part was the recognition of the months of work that had gone into creating beautiful handstitched banners in the tradition of the suffragettes, but reflecting 21st-century concerns.

While there was much to celebrate that day, it was clear that the fight for women’s equality is far from won. A community organiser explained that “the exposure, profile and recognition were really important. It is something that they will always remember, it was a life-changing experience – the experience of participation and making was at the heart of it all.”

While the UK’s Department for Digital, Culture, Media and Sport deliberates on the best way to spend the £1.57bn bailout from the Treasury, we should reflect on whether we shouldn’t be prioritising putting more cash into people and new ideas. It’s a brave new world out there, and we’re all going to have to adapt. There are no limits to what our artists, technicians, actors, creators, musicians, dancers and designers can imagine to bring back live outdoor experiences for audiences stupefied by the isolation of the omnipresent screen. We all want to protect our national culture in its glorious diversity – but it’s the creative workforce who are really under threat at the moment. As the Red Alert campaign demonstrates, there are horrifying figures of up to 1m creative jobs at risk in an industry worth more than £100bn a year to the economy.

From a huge new festival for the West Midlands to an intimate sound world in the south-east, at Artichoke we’re working on new projects, each of which can be safely experienced under current Covid-19 guidelines, giving work to artists, technicians and freelancers, as well as a lifeline to culture-starved audiences. Rather than government emergency response criteria focusing on “financial support for cultural organisations that were financially stable before Covid-19, but are now at imminent risk of failure”, why not invest in creative ideas that will keep everyone in work and offer new experiences to the public?

How about an investment in imagination? Because, in the end, all art is a kind of transaction, sometimes financial, and always an exchange between those who make the work and those who experience it. At this critical moment, we need to support our whole living creative community – artists, technicians, institutions, participants, audiences – in every way we can. So would it matter if there were no more mass gatherings? It would matter very much indeed.