Germany’s role in the Eastern Mediterranean 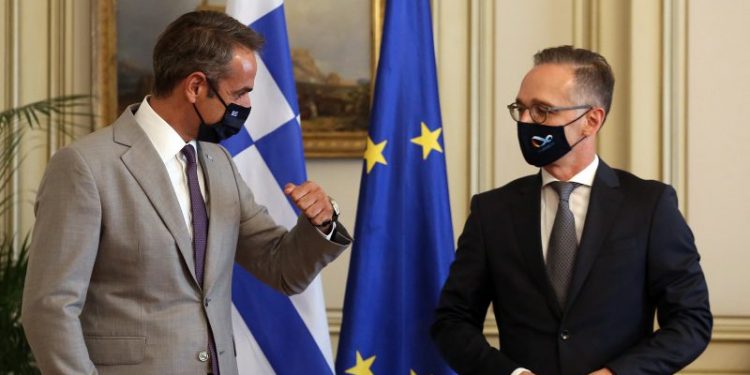 Ankara is seeking a share in oil and gas reserves discovered beneath the continental shelf
off Greek and Cypriot shores, and is pursuing bilateral negotiations with Athens as one way of furthering its aims.

The current standoff started in July, when Turkey’s President Recep Tayyip Erdogan dispatched the research vessel Oruç Reis on an oil and gas exploration mission in waters off the coast of the Greek island of Kastellorizo. Having at one point been withdrawn from the area of dispute, the vessel was dispatched yet again just hours before the scheduled arrival in Turkey of Germany’s Foreign Minister, an act of defiance that triggered cancellation of his trip.

“Ankara must end the interplay between detente and provocation,” Maas warned from Berlin, before heading to Athens and Nicosia for consultations.

Germany has little choice but to help address and resolved the standoff, given that it currently holds the rotating EU presidency and that about four million German residents have roots in Turkey.

If the situation deteriorates further, the EU will have no option other than to impose sanctions on Turkey since Athens and Nicosia made this a condition for their support of the EU’s recently announced sanctions against Belarus. Both maintained that similar measures would have to be taken should Ankara continue to ignore efforts to resolve the growing dispute in the East Mediterranean.

The internationalisation of the conflict has created a crisis within NATO, one which Germany is uniquely positioned to mediate.

Germany is more acceptable to Ankara

This has led to an escalating Franco-Turkish standoff is escalating. France’s President Emmanuel Macron accused his Turkish counterpart of risking maritime combat when a French Courbet-class naval vessel was reportedly targeted by Turkish naval assets escorting the research and exploration vessel Oruç Reis in June.

Both Greece and Cyprus have military procurement deals with France. Moreover, ships from the French naval fleet have participated in joint naval exercises with Greek navy vessels in the region. The fact that Greece’s Prime Minister Kyriakos Mitsotakis has hailed the presence of the French ships as “guarantors of peace” suggests that France’s role, inadvertently or otherwise, has become that of a direct stakeholder rather than a mediator amidst the mounting tensions.

In fact, President Macron has come under a hail of vehement criticism in Ankara, where he is accused of ”profiteering” through the dispute.

Even before the German foreign minister cancelled his Ankara trip this week, he urged that the “windows for dialogue “ remain open to accommodate direct talks, an apparent  concession to Turkish demands for bilateral engagement with Athens.

Germany also has greater credibility in Libya. Following the Franco-British intervention of 2011 in Libya, involving the US, the country has remained in a state of internal conflict, destabilising the Sahel. Following the toppling of the Libyan dictator Muammar al-Gaddafi, Libya has become yet another unfortunate theatre for proxy war, a stage for the engagement of Gulf States as well as terrorist networks.

In 2011, Germany refused to back a military intervention in Libya. Germany’s foreign minister at the time, Guido Westerwelle, foresaw the catastrophic consequences of having a failed state in a North African country with a territory the size of Western Europe. In the nine years since, Germany’s position seems vindicated.

France withdrew from Libya in 2012, seemingly having failed to substantively influence the underlying aims of the Libyan revolution. France returned in 2014 in support of the warlord Khalifa Haftar, a significant partner to its defence industry. In January 2020, France hosted a summit of countries that had sent arms or soldiers to Libya in an attempt to diffuse the situation and significant spillover effects in Europe that included trafficking in people, weapons and illegal substances.

The revelation that Berlin had exported Euros 330 million worth of weapons to countries involved in the war in Libya was a major blow to German credibility in the region, given that Germany officially adhered to the arms embargo. Yet, notwithstanding this, Germany spearheads EU attempts to enforce a UN arms embargo.

From Libya to the Aegean and the Eastern Mediterranean, there are clear differences in the roles being played by Paris and Berlin when ideally they might achieve more through complementarity. Germany’s EU Presidency offers a window of opportunity for conflict mediation. Its intervention in the Eastern Mediterranean has increased its visibility and sharpened its profile as a conflict mediator.

By way of contrast, France has adopted a more aggressive and active role, engaging in a multilateral forum of collective security with Greece, Israel, and the UAE, reaching beyond the NATO alignment. However, in de facto terms, this creates a role for Berlin, a member of NATO that is heavily invested in the Transatlantic Partnership.