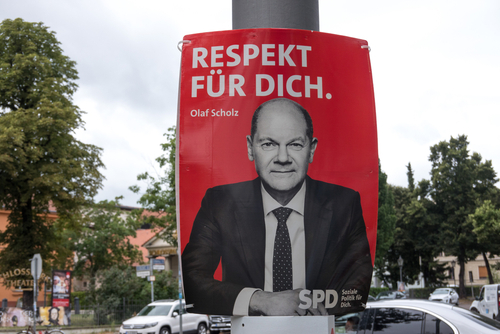 Brussels (Brussels Morning) Germany’s Greens and the Free Democratic Party (FDP) have entered three-way coalition talks with the Social Democrats (SPD) today, signalling that the so-called “traffic light coalition” seems to be the most likely combination to form the next government at this point in time.

SPD chancellor-candidate Olaf Scholz invited the two parties to enter three-way talks over the weekend, but the two smaller parties, crucial for the formation of the next government, decided to first hold their own mutual talks, and then proceeded to hold a round of exploratory discussions with the Christian Democrats (CDU) on Tuesday.

Despite the initial enthusiasm of party leader Armin Laschet, successor to departing Chancellor Angela Merkel as head of the CDU, the Greens’ co-leader Annalena Baerbock emerged from their discussion seemingly much less enthused about the prospect of a coalition with the CDU.

FDP leader Christian Lindner told reporters on Wednesday that the Greens and his party had agreed to meet with Scholz on Thursday for a discussion on forming the government. While neither of the two smaller parties ruled out the possibility of returning to talks with the CDU, they said they would not hold any talks in parallel.

Greens’ co-leader Robert Habeck stressed ahead of the coming talks that his party still has “considerable differences” with both the FDP and the SPD, noting that “many things have not yet been discussed”.

The Greens and the FDP are opposed on a range of issues, with the Greens pushing for an urgent transition to a greener, carbon-neutral economy, while the business-friendly FDP wants to ensure that business owners and the nation’s industry are not stifled by over-regulation and taxation.

SPD, which has run on a platform of reducing inequality and increasing welfare, has more in common with the Greens, while the FDP is closer to the conservative CDU, the party they backed during Chancellor Merkel’s second term.