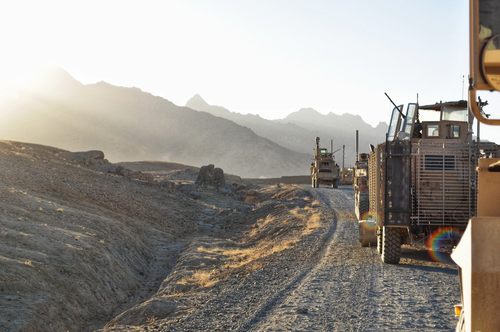 Brussels (Brussels Morning) All German troops were withdrawn from the NATO mission in Afghanistan on Tuesday, ending two decades of military deployment there. Germany’s Defence Minister Annegret Kramp-Karrenbauer described the pullout as the end of “a historic chapter”.

Last week, Germany reported some 570 troops were still deployed in Afghanistan, but now all have been withdrawn. The troops were reportedly airlifted out of the northern Afghan city of Mazar. Last to leave were the KSK special forces, having been deployed to provide security for the Bundeswehr camp during the troops’ final move.

Kramp-Karrenbauer confirmed on Twitter on Tuesday that all the German troops were on their way home, marking the conclusion of a mission and “an intense deployment that has challenged and shaped us”.

Accumulatively, more than 150,000 German soldiers were stationed in Afghanistan over the course of the past two decades, dating back to when the NATO mission began there in the wake of the 11 September terrorist attacks in the US. Many German troops were deployed for more than one tour of duty in Afghanistan.

Despite failing to permanently cripple the Taliban and stabilise the country, the NATO mission will end this year, after Joe Biden, the new US President, announced that all US troops would  withdraw from Afghanistan by 11 September, having selected the 20th anniversary of the 9/11 attacks as the final deadline for the pullout.

Lacking their own strategic airlift capabilities and much of the essential logistics that had been provided by US forces in Afghanistan, all the other NATO allies are also pulling out, most of them well ahead of the final US withdrawal.

The German contingent, which numbered around 1,100 troops before the US announced its withdrawal, is to make a stop in Tbilisi before finally landing back home. On arrival in Germany, all of the troops will be subject to a two-week quarantine, to prevent the spread of the Delta coronavirus variant. At least one German soldier was confirmed as being infected with the variant earlier this month.