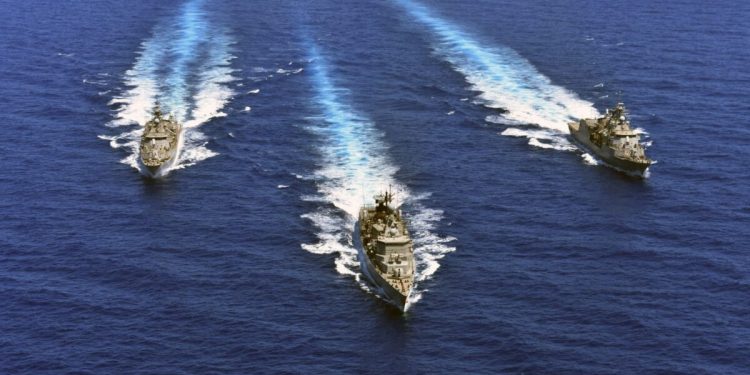 In this photo provided by the Greek Defense Ministry, warships take part in a military exercise in Eastern Mediterranean sea, on Tuesday, Aug. 25, 2020. Germany's foreign minister appealed to NATO allies Greece and Turkey to deescalate military tensions in the eastern Mediterranean, warning Tuesday that "any spark, however small, could lead to a disaster." (Greek Defense Ministry via AP)

Germany has called for naval exercises in the eastern Mediterranean to cease in an attempt to defuse tensions between Greece and Turkey that it fears could tip over into “catastrophe”.

Greece and Turkey lay competing claims to the same parts of the eastern Mediterranean sea and are at odds over potentially abundant gas reserves and maritime rights.

Germany’s foreign minister, Heiko Maas, who is trying to mediate between the two countries, said the precondition for talks was an end to military manoeuvres. “For sure the parties will not sit down at the table when warships are facing each other in the eastern Mediterranean,” he said.

During shuttle diplomacy between Athens and Ankara this week, Maas said the current situation in the eastern Mediterranean was akin to “playing with fire” where “every little spark can lead to catastrophe”.

Turkey has announced it will hold live-fire military exercises off its southern Mediterranean coast next week, while Greece has staged war games with France, Italy and Cyprus. France announced this month it was reinforcing its military presence in the sea by sending two fighters and a naval frigate.

Since Turkey announced it was sending a research ship, the Oruç Reis, escorted by gunboats, to carry out a drilling survey close to the Greek island of Kastellorizo, Greece and Cyprus have intensified calls for a tough EU response.

The EU’s foreign affairs chief, Josep Borrell, was due to present “a range of options” for dealing with Turkey at a meeting of EU foreign ministers in Berlin on Thursday and Friday. An EU official said those options would be “broader than sanctions”, stressing the importance of dialogue with a “very important neighbour”.

The EU imposed economic sanctions in response to what it called “illegal” Turkish drilling off the coast of Cyprus in 2019. Turkey argues that the maritime zone of the divided island falls under its jurisdiction.

Evángelos Meïmarákis, a Greek MEP in the ruling centre-right New Democracy party and a former defence minister, said EU ministers and leaders must act “decisively and specifically with the imposition of EU sanctions against Turkey. Europe must protect the borders of Greece, which are European borders.”

Emmanuel Macron, the French president, backs sanctions but Germany is reluctant, stressing the need for talks to come the situation. One of Turkey’s former EU ambassadors to Brussels, Selim Yenel, criticised France for “taking sides” against a Nato ally.

“Turkey is in Nato, Greece is in Nato, France is in Nato. It’s as if EU solidarity trump’s Nato unity. This is something that is really surprising,” he said. “Both sides should give diplomacy a chance. There is a deep distrust on both sides, but we have to start somewhere.”

He added that the EU had “lost leverage over Turkey” since a botched military coup against the president, Recep Tayyip Erdoğan, in July 2016 accelerated a sharp downturn in relations. The EU strongly criticised Erdoğan’s crackdown against state employees and the media in the aftermath of the coup.

On paper Turkey remains an EU candidate country, but talks on accession and reform of its customs union with the bloc are in the deep freeze.