Germany pressured to side with Armenia or Azerbaijan 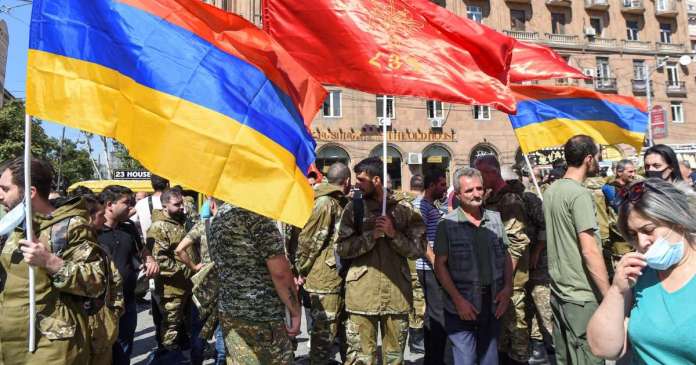 Brussels, (Brussels Morning) Germany has come under pressure from both Armenia and Azerbaijan to pick a side in the Nagorno-Karabakh conflict, something Berlin rejects, DW reported yesterday, Thursday.

Instead, Germany has called on both countries to respect the ceasefire agreements reached on 10 and 17 October and to immediately end hostilities and avoid further casualties.

Armenia and Azerbaijan did commit to facilitating humanitarian assistance, the German Foreign Office noted, and now it is vital that the two resume efforts towards finding a peaceful and lasting solution to the conflict. The Foreign Office reiterated Germany’s support for the Organisation for Security and Co-operation in Europe (OSCE) Minsk Group co-chairs and their efforts to arrive at a negotiated solution.

Armenia’s Ambassador to Germany Ashot Smbatyan has urged the German authorities to condemn Azerbaijan’s aggression and Turkey’s negative role in the conflict, noting that Canada, France, Russia and the US have already done so. Armenia’s Minister of Foreign Affairs Zohrab Mnatsakanyan has accused Azerbaijan of taking every opportunity it could over the last 30 years to isolate Nagorno-Karabakh.

Meanwhile, Azerbaijan’s Ambassador to Germany Ramin Hasanov has called on Berlin to condemn and demand an end to the Armenian occupation of Nagorno-Karabakh. He criticised the Minsk Group for failing to do more than merely calling for a ceasefire, noting pointedly that a ceasefire had been in place for years.

Mnatsakanyan claimed Turkey was a destabilizing factor, having brought Islamist militia from Syria and Libya to Azerbaijan and making it a terrorist hub. As further evidence of Ankara’s disruptive policies, he pointed to events in the Eastern Mediterranean, North Africa and the Middle East.

Hasanov denied that Turkey, which he described as a brother nation, was involved in the conflict. Nor was Ankara’s help required, he said, since Azerbaijan has enough forces to keep occupying troops out of its territory.

He supported the idea of Germany becoming more actively involved, noting the German parliament’s acknowledgement that Germany’s shared responsibility for the Armenian Genocide was reason enough for the government to campaign more vigorously for peace in the region.

US to push Poland to support global minimum corporate tax