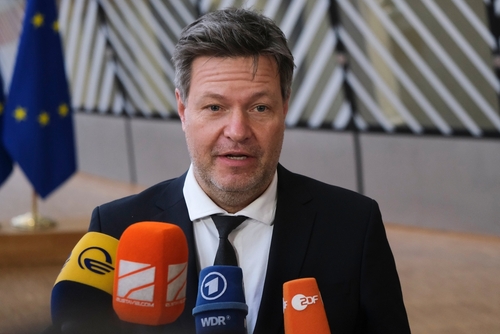 Minister Robert Habeck arrives to attends in an emergency meeting to discuss the energy situation in Europe amid Russia's invasion of Ukraine, in Brussels, Belgium February 28, 2022.

Belgium (Brussels Morning Newspaper) German Vice Chancellor and Minister of Economy Robert Habeck announced on Monday that the two operational nuclear power plants in Germany will be retained online beyond their planned decommissioning date as an emergency reserve throughout the winter.

For the Green Party co-leader, the announcement represented another in a line of walkbacks as Germany’s ruling parties were all forced to abandon their red lines on energy, environment, taxation and security policy in the light of Russian invasion of Ukraine.

According to Habeck, the Neckarwestheim and Isar 2 plants, located in Baden Württemberg and Bavaria, respectively, will be kept on standby until mid-April 2023, so they could provide additional power to the German energy grid should existing capacity, destabilised by potential lack of natural gas as Russia stopped its deliveries, prove to be insufficient during peak usage hours over the winter months.

Both plans were originally scheduled to be mothballed by the end of the current year, the final vestige of German nuclear power. The phase-out of nuclear power in Germany started in 2011, when former Chancellor Angela Merkel listened to the public opinion following the Fukushima disaster in Japan, and decided to make a break from nuclear power in the future.

For the German Greens, which grew out of the 70s anti-nuclear movement, the phase-out of nuclear power was one of the key policy goals. However, Habeck was temporarily forced to backtrack both on nuclear and on coal energy. While the current ruling coalition, also including centre-left Social Democrats (SPD) and the liberal Free Democrats (FDP), agreed to accelerate the complete phase-out of coal by 2030 instead of 2038 as a concession to the Greens, the government decided two months ago to reactivate a number of mothballed coal power plants, as another measure aimed at reducing natural gas consumption.

Despite going back on their campaign promises, the Greens have not suffered a hit in the polls. Most public opinion surveys show the German voters are supporting the proposed measures, and the Greens are currently polling ahead of both the SPD and the FDP.

The SPD, a traditionally pacifistic party, was also forced to abandon its ideals as Moscow launched its attack on Ukraine, when the party’s Chancellor Olaf Scholz announced a 100 billion euro plan to rearm and modernise the Bundeswehr, in addition to raising the country’s defense budget to 2% of its GDP.

Scholz later went even further beyond his party’s traditional red lines in approving offensive weapons shipments to Kyiv, even going as far as approving deliveries of heavy weapons, despite objections within his own party. Opinion polls showed the Chancellor read the public correctly, as a majority of Germans backed these moves.

FDP leader Christian Lindner was also forced to abandon some of his red lines, established as the three parties were forming the ruling coalition. Lindner’s campaign pledge was no tax hikes, but the government has recently announced it would raise windfall taxes on electricity companies in order to soften the impact of higher gas, oil and coal prices on consumers.

Despite the walkbacks, many German liberals also see the latest government decision as an opportunity to do an about-face on the nuclear policy, arguing that nuclear power plants could help Germany reach its zero-emission goals sooner and cheaper, as well as help secure a more stable long-term energy security. The Greens have rejected such suggestions, for now.