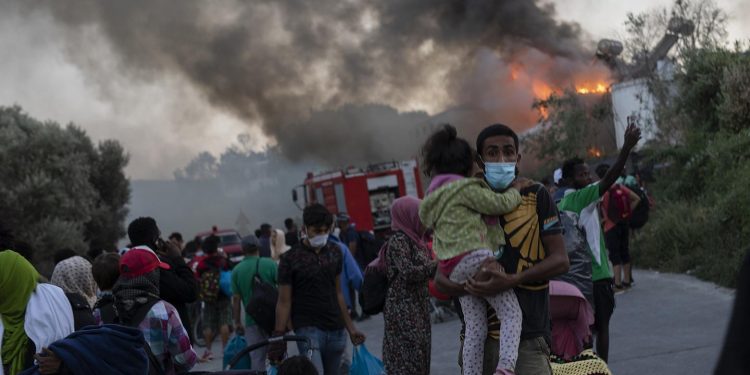 Germany and France will take in children left without shelter after the fire that swept through the Moria migrant camp on the Greek island of Lesbos on Wednesday, German Chancellor Angela Merkel announced in Berlin on Thursday, according to a Reuters  report.

At a ceremony marking the 30th anniversary of the fall of the Berlin Wall, Merkel said that Greece’s Prime Minister Kyriakos Mitsotakis had requested Germany to take in minors brought to the mainland from the razed camp. Germany has been in contact with France and both countries are willing and prepared to join in the effort, she said.

In stressing that migration is not solely the problem of the receiving countries where migrants arrive, Merkel pointed out once again that the EU has a duty to take responsibility for helping solve the problem.

Ten EU member states have agreed to take in 400 unaccompanied minors from the camp. France and Germany are to welcome between 100 and 150 each. Dutch State Secretary for Justice and Security Ankie Broekers-Knol said the Netherlands is prepared to take in 100 unaccompanied minors and families with children, adding that the tragic circumstances demanded that extraordinary steps be taken, DW reports.

The Moria camp was almost completely destroyed. On Thursday, Greek authorities announced an investigation to determine what happened. The authorities alleging that fires were started deliberately by residents angered by quarantine measures imposed with the aim of containing a COVID-19 outbreak.

EU-wide reforms are being resisted by Poland, Hungary, Czech Republic and Slovakia all of which have rejected the idea of compulsory migrant intake quotas.

Austrian Chancellor Sebastian Kurz said the current pressure on EU member states to take in migrants was similar to that in 2015, and that giving in to pressure would be a mistake comparable to that made by the EU then, according to Reuters . Kurz called for a holistic approach to address the problem and not mere symbolic politics.