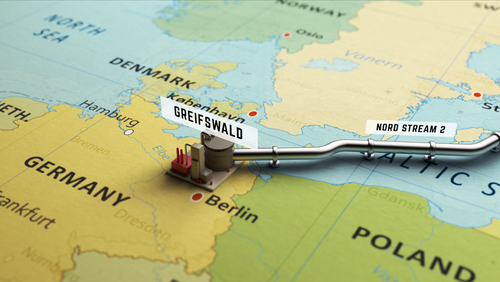 The regulator stated that was temporarily stopping the process because the consortium behind the pipeline must first open a German subsidiary company in order to get an operating license, Reuters reported.

The move comes against a backdrop of soaring energy prices in Europe, which jumped a further 11% after the BNetzA announcement.

Trevor Sikorski, natural gas analyst at Energy Aspects consultancy, commented that the decision “does push back expected timelines quite a bit.”

He said it was unclear just how long it would take to set up a German subsidiary and complete the process of reapplying for an operating license, but predicted that gas would not start flowing in the first half of 2022.

EU split over the project

EU member states are divided about the gas pipeline. Some warn that it will make the bloc overly dependent on Russian gas while others cite the benefits of securing energy supplies. Meanwhile, Ukraine has been spearheading the push against the gas pipeline, accusing Russia of using energy to undermine Europe’s security.

Nord Stream 2 confirmed that BNetzA had notified it about the decision, while adding that “we are not in a position to comment on the details of the procedure, its possible duration and impacts on the timing of the start of the pipeline operations.”

Konstantin Kosachev, Chair of the Russian Foreign Affairs Committee of the Federation Council, said there was no doubting the fact that “any delay in the pipeline certification, all the more so on the eve of winter, is not in the interests of the European Union”.

The BNetzA announced that “a certification for the operation of Nord Stream 2 will only be considered once the operator is organised in a legal shape compliant with German law.”