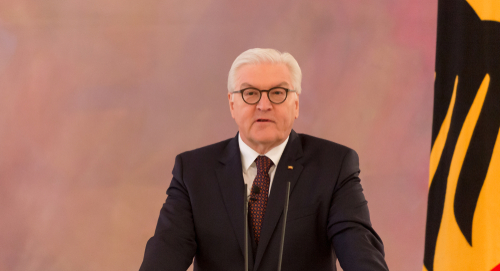 Belgium (Brussels Morning Newspaper) German President Frank-Walter Steinmeier expressed regret on Tuesday for his long-time advocacy of western rapprochement with Russia, admitting his stance had been a clear mistake in retrospect.

Stenimeier, a member of Social Democrats (SPD), served as Foreign Minister under Chancellor Angela Merkel between 2013 and 2017, before becoming elected German President, a largely ceremonial role intended as a unifying figure, a moral authority holding himself above everyday political squabbles and exhorting others to behave better.

Steinmeier long believed, as his former SPD head Gerhard Schröder, that Europe and Germany should aim for closer economic ties with Russia, as a way to anchor Moscow to the western-oriented global system.

“We failed on many points,” Steinmeier told German broadcaster ZDF. “It is true that we should have taken the warnings of our eastern European partners more seriously, particularly regarding the time after 2014,” he said, referring to Russian annexation of the Ukrainian Crimea peninsula.

“My adherence to Nord Stream 2 was clearly a mistake,” said Steinmeier. “We continued to believe in bridges that Russia no longer believed in and against which our partners had been warning us,” he noted, adding that this mistake had cost Germany “a lot of credit and credibility” in Eastern Europe.

“I did not believe Vladimir Putin would embrace his country’s complete economic, political and moral ruin for the sake of his imperial madness,” Steinmeier said, noting that it will now be impossible to return to normal relations with Russia, for as long as Putin remains in power.