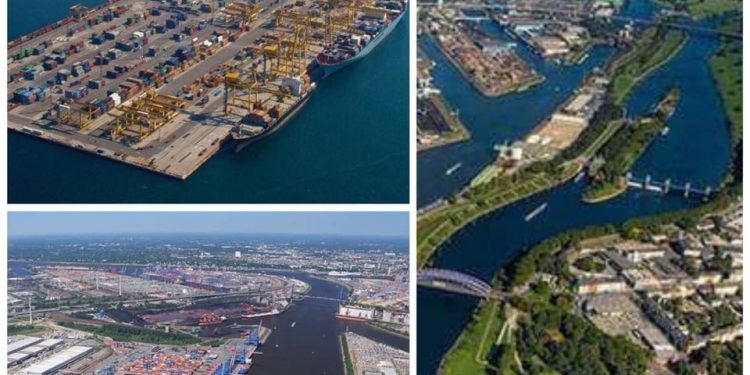 The upper left corner is the port of Trieste where the deal with the German company coincides with the visit of US Secretary of State, Mike Pompeo. In the lower Left corner is the Port of Hamburg, which will take over 50.1% from the entrepreneurs Francesco Parisi and Vittorio Petrucco. On the right, a panoramic view of the world’s largest inland port, the Port of Duisburg

The majority holding of Trieste Logistics Platform is to be acquired by one of the major players in the European ports network.

The Port of Hamburg will take over 50.1% from the entrepreneurs Francesco Parisi and Vittorio Petrucco, who will retain active roles in the company after completing quayside works on the port of Trieste’s new logistics platform  which have been in the pipeline for the last 20 years.

In 2019, the Port of Trieste signed a memorandum with the state-owned China Communications Construction Company that was seeking a majority share. The deal now struck with the German company coincides with the visit of US Secretary of State, Mike Pompeo.

Duisport (the Duisburger Hafen AG) is the owner and operator of the world’s largest inland port, the Port of Duisburg, and has already invested in the Port of Trieste.
The official ceremony marking the closure of the agreement and the conclusion of on the logistic platform is scheduled for Wednesday morning, 30 September. The event will take place at Scalo Legnami and will be hosted by the Upper Adriatic Port System Authority, in the presence of the Minister for Economic Development, Stefano Patuanelli, from Trieste. Brussels Morning will attend to cover the event and talk to the stakeholders.