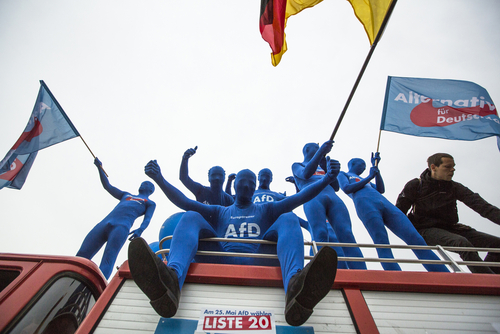 BERLIN, GERMANY - MAY 23, 2014: Activists rally in support of AfD (Alternative for Germany) - political party founded in 2013. Won 7 of Germany's 96 seats for European Parliament in May 2014 election.

Brussels (Brussels Morning) While the German Greens have been gaining ground in the former West German states and on the national level, the far-right Alternative for Germany (AfD) seems to be mirroring the Greens’ success in the former East Germany, leeching votes from the ruling Christian Democratic Union (CDU).

A slew of recent polls indicate that AfD is likely to emerge as the strongest party in Sunday’s state election in Saxony-Anhalt. Deutsche Welle reports that the development illustrates growing problems for Chancellor Angela Merkel’s CDU, which effectively needs to run two campaigns ahead of the federal elections scheduled for September.

The CDU needs to compete with the Greens in the west of Germany, without alienating its conservative voters in the east, where the party faces an opponent at the exact opposite end of the political spectrum from the Greens.

Saxony-Anhalt’s current Premier, CDU’s Reiner Haseloff, faces uncomfortable prospects if he wants to remain in power in the former East German state of some 2.2 million people. His current centrist coalition, in which the CDU holds power with the backing of SPD and the Greens, is unlikely to be sufficient to secure a majority after Sunday’s election.

An alliance with the AfD is out of the question, yet with the party expected to secure more than a quarter of all votes, CDU’s coalition options will be limited. Should the current three-way coalition lose the majority, Haseloff could be looking at joining a coalition with the Left, which is nearly as big a taboo as standing next to AfD, and likely to further alienate CDU’s voters in the federal elections.

The AfD continues to be a power in the east of Germany, where it regularly polls above 20% in contrast to the 10% it hovers at national level. Even three decades after German reunification, the east remains underdeveloped compared to the west, causing many voters to back AfD as their protest option, something that could overthrow the status quo.