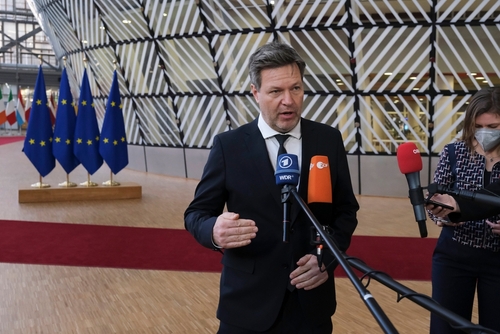 Minister Robert Habeck arrives to attends in an emergency meeting to discuss the energy situation in Europe amid Russia's invasion of Ukraine, in Brussels, Belgium February 28, 2022.

He stressed that the EU stood united after Russia attacked Ukraine, but noted that unity “is already starting to crumble again,” according to Reuters reporting.

At the summit, EU member states are to discuss plans to impose an embargo on Russian oil and wean the bloc off Russian energy imports.

Habeck stressed the importance of speaking with one voice and called on the German ruling coalition to stand united despite differences of opinion, adding that he would like to see similar unity on the level of the EU.

“Europe is still a huge economic area with incredible economic power… and when it stands united, it can use that power,” he concluded.

The bloc could not agree on the latest package of sanctions against Russia as Hungary blocked the move. The country depends on Russia for 65% of its oil needs and is landlocked, limiting its possibilities for import.

Hungary rejected the plan according to which it would have two years longer than other bloc members to stop importing Russian oil, calling for at least four years to transition and 800 million euro from the EU to prepare its infrastructure.

Hungary stressed that it has to adapt its refineries and increase pipeline capacity to Croatia in order to wean itself off Russian oil.

France and the EU Council proposed on Sunday to exclude from the oil embargo the Druzhba pipeline, which Hungary is dependent on, EU sources noted.

The pipeline accounts for roughly one third of EU’s Russian oil imports, with the remainder arriving in tankers, France24 reports.

The proposal is aimed at reaching a deal on the sixth package of sanctions against Russia which the bloc has been discussing since early May.

The proposed round of measures includes an embargo on Russian crude oil and petroleum products by the end of the year, blacklisting of additional individuals and more sanctions on Russian banks.

Sources pointed out that the EU could delay the package until bloc members find a solution to provide Hungary with non-Russian oil.