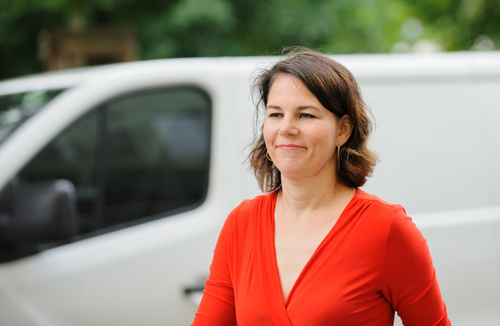 Berlin, 2018-06-11: Annalena Baerbock arrives at the party headquarters in Berlin

Brussels (Brussels Morning) The German Greens’ co-president and chancellor candidate Annalena Baerbock was accused of plagiarism by an Austrian academic earlier this week. She and her party reject the claim, describing it as “character assassination”, and have hired a prominent libel lawyer to refute the allegation.

The claim was made earlier this week by Austria’s so-called “plagiarism hunter”, Stefan Weber, one of whose previous plagiarism probes forced former Austrian Labour Minister Christine Aschbacher to resign in January.

Analysing Baerbock’s book “Now: How We Can Renew Our Country”, Weber highlighted several passages that appeared to be have been lifted, word for word, from other sources, among them a 2019 article by the US political scientist Michael T. Klare.

Given Weber’s penchant for investigating plagiarism related to academic works such as doctoral theses. What is unusual in the Baerbock case is that he took issue with a non-fiction manifesto that spelled out the Green leader’s political philosophy. The cited passages were reportedly used for context. Moreover, the book itself was actually ghost-written by a journalist.

Weber, who also conducts plagiarism checks on commission and offers PR services, insists no one paid him to investigate the Baerbock book, and maintains that he examined it out of pure “scientific interest”.

In order to fight the allegations, the Greens have hired Christian Schertz, a prominent lawyer, whose high profile clients have included the footballer Christiano Ronaldo and the German national team manager, Joachim Löw.

Defending her book, Baerbock emphasised on Thursday that there was no copyright breach. “I wrote what I want to do with this country, and described the world as it is with facts and realities”, she said in an interview with Brigitte.

Despite the Greens’ initial surge, which saw the party briefly move ahead of the ruling Christian Democratic Union (CDU) in the polls, the party has fallen back in the last month, and now trails CDU by some 10%.

A series of personal scandals, including errors in the Green leader’s resume, have caused Baerbock’s ratings to drop below those of the other prominent chancellor candidates. Her supporters claim that her mistakes are being judged against far more stringent standards than those applied to her rivals.

Baerbock’s critics have dismissed her as inexperienced and her public image is increasingly fragile. Voters, who had expected her to prove the critics wrong, now appear quick to abandon her in the wake of political errors.