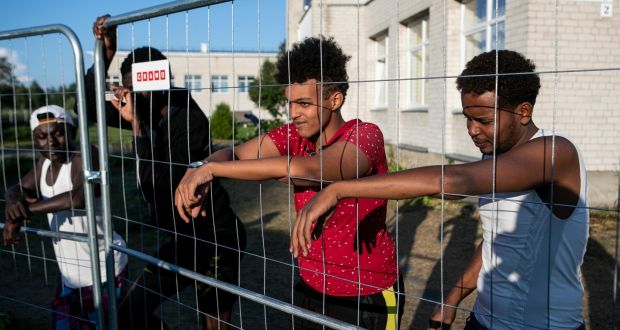 Speaking after a meeting with Kaja Kallas, the Prime Minister of Estonia, Merkel stressed that “President Lukashenko is using refugees, for example from Iraq, in a hybrid way to undermine security, and, of course, we condemn this in the strongest possible terms,” according to DW reporting on Tuesday.

Estonia is helping Lithuania to deal with the surge of migrants that entered the country illegally from Belarus, with EU officials stressing that Belarus intentionally allowed the surge, in an attempt to pressure the bloc into lifting sanctions.

The EU imposed sanctions on Belarus over the abuse of the political opposition after the controversial presidential election in 2020 and a crackdown on anti-government protests.

According to reports, more than 4,000 migrants entered Lithuania illegally this year in contrast with just less than a hundred that entered the country in 2020. Besides Lithuania, other EU member states that border Belarus have reported significant increases of illegal border crossings this year.

“We are closely coordinating with European partners on everything,” Merkel noted and added “we will also try to take a common position, because this hybrid kind of confrontation, as used by Belarus, is an attack on all of us in the European Union.”

Kallas described Lukashenko as a dictator and called for a new wave of EU sanctions against Belarus, stressing that Lukashenko is weaponising migrants against the bloc.

According to a draft statement for the meeting of EU interior ministers later today, the bloc is prepared to support Lithuania with financial aid and provide border officers to help the country deal with the crisis.

The EU is expected to discuss a joint stance on how to deal with refugees and migrants in the coming months as return of the Taliban to power in Afghanistan is likely to trigger a wave of refugees.