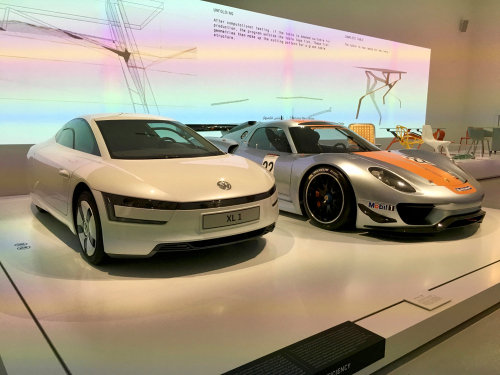 Doha, Qatar - 7th Oct 2017: VW XL1 and Porsche 918 RSR, on display at exhibition "Driven by German Design". It explores how the design in Germany has changed over the past several decades

Brussels (Brussels Morning) The determination and drive of German carmakers Volkswagen and BMW to transit to battery electric vehicles (BEVs) in the future, is reflected in their rising stock as investors respond to their stated goals of going after Tesla’s market share more seriously, Reuters reported.

Despite accounting for only a fraction of the volume produced by the largest global carmakers, Toyota and Volkswagen, the all-electric manufacturer Tesla soared in the stock market in recent years, overtaking all traditional, internal combustion engine (ICE) manufacturers.

The German car industry, once a flagship of the country’s export-oriented economy, got left behind as an unprecedented gap developed in the stock markets between early adopters of the all-electric technology, and those who have yet to catch up. Despite their slow start, the German carmakers are well-positioned, both in production capacity and distribution platforms, to grab a more significant share in the BEV market.

As Volkswagen and BMW are gradually shifting away from ICEs, the key metric seems to be investor trust, which recently began treating the companies as undervalued. The impetus to the electrification drive is boosting both the German DAX stock market index, and the broader European equity markets.

On Monday last, VW CEO Herbert Diess announced that the company aims to make 70% of its European sales all-electric. Its stock has begun to climb sharply from coronavirus pandemic-driven lows. Taking a page from Tesla owner Elon Musk’s book, Diess took to Twitter and social media to celebrate as the firm passed 100 billion euro market value earlier this month. It has since grown 52%, year-to-year, reaching 143 billion euro.

Meanwhile, on Wednesday, BMW announced that it is aiming for half of its sales to be BEVs by 2030, and pledged that some 90% of its market categories will include an all-electric model by 2023. Kairos strategist Alessandro Fugnoli called the latest developments “the rebirth of the German auto”.

Despite its sudden growth, VW still has only a quarter of Tesla’s value on paper, but analysts believe there is significant room for improvement, now that the path has been set. “Abandoned by all, and in particular by investors, the German auto industry, after eating a lot of dust and falling in a state of disrepair, understands that adherence to electrics must be total,” Fugnoli observed.