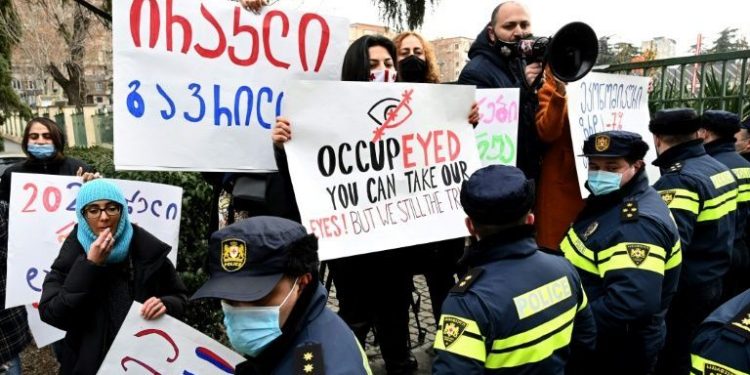 The leader of the United National Movement (UNM), Nika Melia, was dragged by police officers from the party headquarters, after a raid which involved the use of tear gas to flush out and subdue opposition politicians. Leaders of all of Georgia’s opposition parties were camping in Melia’s party headquarters, along with their supporters. Many were also detained.

The political situation in Georgia has deteriorated fast following the parliamentary elections in October last year, which the opposition accused the ruling party of rigging by bullying and threatening voters.

UNM and seven other opposition parties said they would boycott the government, dismissing the election outcome as “illegitimate”. Tens of thousands of opposition supporters protesting on the streets of the capital Tbilisi were met by a police crackdown that included the use of water cannons.

Melia was subsequently charged with inciting violence in the street protests, and a Tblisi court ordered him placed in pre-trial detention after he refused to pay increased bail. Melia maintains that charges against him are politically motivated.

Prime Minister Giorgi Gakharia resigned on Thursday over the judiciary’s plans to arrest Merlia, a move that spurred the opposition to call once again for snap elections to be held.

The UK ambassador to Georgia Mark Clayton said in a Twitter post he was “shocked” by the violent scenes at the UNM headquarters. “Violence and chaos in Tbilisi are the last thing Georgia needs right now. I urge all sides to act with restraint, now and in the coming days”, he tweeted.