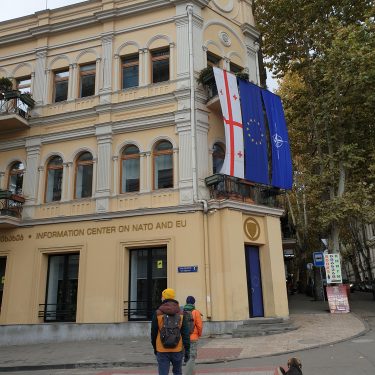 TBILISI, GEORGIA. November 22, 2019. Young person with a dog crossing a street at the Liberty square in front of the NATO building in the downtown Tbilisi.

Brussels (Brussels Morning) As part of a two-day mission of the Georgian president in Brussels, NATO Secretary General Jens Stoltenberg met with President Salome Zourabichvili at NATO’s headquarters on 22 January.

The visit comes a month after the confirmation of Prime Minister Giorgi Gakharia and a new parliament dominated by the Georgian Dream Party. With Euro-Atlantic integration firmly on the government’s agenda, Georgia hopes to make a 2024 bid for EU membership and move closer to NATO and the US.

After the meeting, Stoltenberg affirmed on the record that the reform of Georgia’s defence sector has progressed positively and that the country is now closer to NATO membership.

Georgia’s contribution to the Euro-Atlantic pact significantly outweighs the size of its economy and population and has been described as “a NATO member minus Article 5 guarantees”, by Ambassador Tedo Japaridze.

Article 5 of the North Atlantic treaty states that “if a NATO Ally is the victim of an armed attack, each and every other member of the Alliance will consider this act of violence an armed attack against all members and will take the actions it deems necessary to assist the Ally attacked”.

With the looming threat of Russian aggression in the neighbourhood, commitment to the collective defence provision has typically made NATO members nervous, but continued cooperation between Georgia and the 30-member coalition has shown a commitment to ultimate membership.

Georgia has for years been “the largest per capita contributor to NATO’s ISAF operation and Resolute Support Mission in Afghanistan”, said Georgia’s Ambassador to NATO, Victor Dolidze, in a statement to Brussels Morning,

Dolidze also noted that Georgia’s institutional relationship with NATO continues to deepen on a tactical level, since the country is fully integrated in NATO’s Response Force. Also, NATO is investing substantially in Georgia’s military capability through the NATO-Georgia Package renewed in December 2020.

NATO and the EU view Georgia as a significant geopolitical bridge both in terms of transport connectivity and energy security.

During her visit to Brussels, Zourabichvili, articulated the political consensus in Tbilisi, affirming that Tbilisi sees eye-to-eye with its Euro-Atlantic partners, sharing the vision of a democratic country, anchored in the objective of NATO and EU membership with a strategic role in the region.

Georgia’s Euro-Atlantic trajectory is a point of consensus in Georgia among both government and opposition.

During the visit, Georgia’s Ambassador to the EU, Natalie Sabanadze, reiterated Georgia’s commitment to the objective of full EU membership, although the country is not officially a candidate for accession.

Sabanadze underlined that her country is eager to play a facilitating role in the Black Sea. Along the same lines, Georgia’s Deputy Minister of Foreign Affairs, Vakhtang Makharoblishvili, noted that Tbilisi is keen to promote the EU policy agenda in the region both politically and in terms of investment.

Following the conclusion of Georgia’s Association Agreement and the Deep and Comprehensive Free Trade Agreement (DCFTA), Georgia aspires to emerge as a logistic and trade hub, bridging Central Asia and the Caucasus with the Single Market.

“Georgia’s NATO integration is long-awaited and expected here in Tbilisi”, former Minister of Defence Tinatin Khidasheli told Brussels Morning that NATO must confirm membership a realistic possibility rather than merely an aspiration, not least to deter Russia’s overtures to the region, she said.

Focusing on the strategic rationale, Khidasheli pointed out that Georgian membership is strategically important.

“NATO needs to deliver at least on its Black Sea Security agenda and keep the promise of the Warsaw Summit”, she maintained, making clear that delays undermine NATO’s credibility and embolden Russia.

“The decision to bring Georgia into NATO is the best deterrent step the organisation can make”, Khidasheli observed.