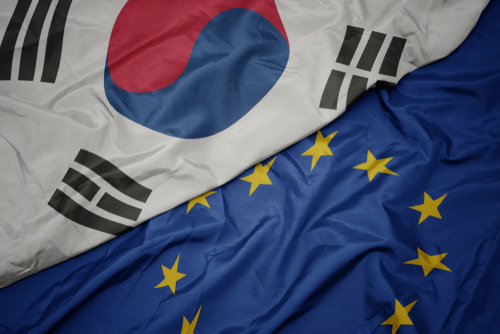 The report notes that close relations between Brussels and Seoul under President-elect Yoon Suk-yeol are important for managing the growing rivalry between China and the US as well as China’s rising power, according to Reuters reporting on Tuesday.

The report to be released by the Brussels School of Governance points out that the war in Ukraine and the importance of countering “Moscow’s direct threat to the rules-based international order” highlight the need for closer ties between the EU and South Korea.

Yoon previously announced plans to send a diplomatic delegation to the EU before 10 May, when he is to take office. As part of his plan to strengthen South Korea’s international role, Yoon announced he would expand “the breadth of diplomacy in the EU and throughout Asia.”

Authors of the report, including former South Korean and EU diplomats, stressed that “Cooperation between Seoul and Brussels can help mitigate the most negative effects of Sino–American competition and ensure that the United States does not turn on its allies but rather cooperates with them.”

Noting that Seoul and Brussels have been developing relations with the US more than with each other, former South Korean Ambassador to the EU Kim Chang-beom noted that closer ties could help to increase their strategic importance to Beijing and Washington.

“It would give additional manoeuvring room for South Korea in its dealings with the policy dilemma arising from the rising competition,” he concluded.

According to the report, the EU and South Korea should form bilateral councils and work together on issues like denuclearisation of North Korea.

They should also modernise their trade agreement as deals that the EU signed with Japan and other South Korea’s competitors are broader in scope and more ambitious, the report notes.

It adds that South Korea’s plan to join the Digital Economy Partnership Agreement launched and the Comprehensive and Progressive Agreement for Trans-Pacific Partnership could affect economic cooperation between South Korea and the EU if not addressed.