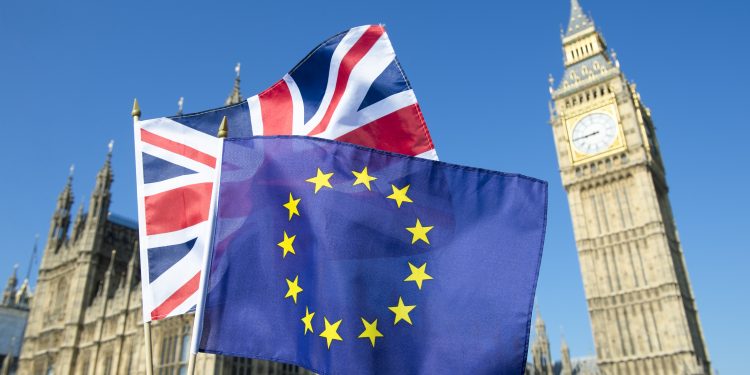 European Union and British Union Jack flag flying in front of Big Ben and the Houses of Parliament at Westminster Palace, London, in preparation for the Brexit EU referendum

Brussels (Brussels Morning) There has been progress on the Brexit talks this week but the outcome remains uncertain. There is still genuine commitment to keep the talks going to ensure that trade flows without quotas or tariffs from next year, when the UK’s transition period ends following its EU exit.

Due to corona concerns, the negotiators have been unable to meet in person for talks. The EU head negotiator Michel Barnier was still awaiting corona test results on Thursday of this week in order to be able to return to the talks.

”They are continuing to negotiate a deal but we won’t know until there is a deal,” Georgina Wright, senior researcher with the UK Institute for Government and fellow of the German Marshall Foundation concluded.

There have been rumours that a deal would be reached right before the end of November, with the decisive turns in the talks expected just at the end of this week. The timing is complicated because the European Parliament has repeatedly warned that members won’t simply vote to confirm a done deal but want their say in the process.

There is scope for provisional application of an agreement, in the wake of ratification by the EU countries, but that would only apply once the European Parliament already is in agreement.

The crucial topics are still linked to governance, ensuring the so-called level playing field and also the issue of fisheries. On the EU side, it’s vital to stick to the principles for the single market.

”A strong governance system is essential to assure that was has been agreed is done,” Commission President Ursula von der Leyen decalred in Brussels this week.

On goods, services and transport, there is largely agreement within the new treaty, as well as progress on judicial cooperation. In the UK, fears run high over price hikes and shortage of consumer products, while the Commission says the EU side is prepared for a no-deal scenario, even though any concrete instructions for that eventuality would only be rolled out in the weeks to come. Meanwhile, MEPs believe that, subject to a few questions, the agreement is pending.

According to German MEP Bernd Lange, Iit’s 99% done. Speaking at the European Parliament’s Wednesday session, Large regretted the fact that the talks had stalled earlier in the year thereby  raising the pressure towards the end with the transition period due to expire on the last day of December. EU leaders have plans for an emergency meeting on 28 December to prepare for either scenario.

”No deal at all is still a distinct possibility,” according to Georgina Wright, researcher with the British Institute for Government. ”The disruption in that case would be more severe.

There is the problem that due to the corona situation many businesses haven’t got ready or had the resources to get ready for multiple scenarios. Will they go for that or think a deal is better? It is all political.”

”In terms of governance, the agreement would provide for an institutional architecture for dispute resolution. And it is a question of how regularly that would be updated,” Georgina Wright says.

”The question of a level playing field is a big issue — it is, for example, about how to ensure that the UK would not be competing unfairly by subsidising its businesses in a manner that the EU could not compete with. It is all about fair competition and social and labour laws.”

From 1 January next, it is still likely that there will be disruptions at customs and further checks on exports in both directions across the English Channel. EU businesses are not entirely sure of the exact paperwork that they will be required to submit.

”The UK government bought itself time by allowing EU products to enter on the same terms for  the first six months of next year,” Georgina Wright points out. ”But on the EU side, there will be controls on British products right away from 1 January with requirements on paperwork and that all products meet EU standards.”

There is still the risk that trade flows within the UK will be impacted in terms of Northern Ireland, even though there will not be a so-called hard border between Ireland and Northern Ireland. It will takes further work to specify the details on the protocol with Northern Ireland.

”Trade within the UK should be facilitate but those decisions have not been made yet, even though they are expected as soon as possible,” Wright concludes.