Gentsesteenweg route control is coming in the spring 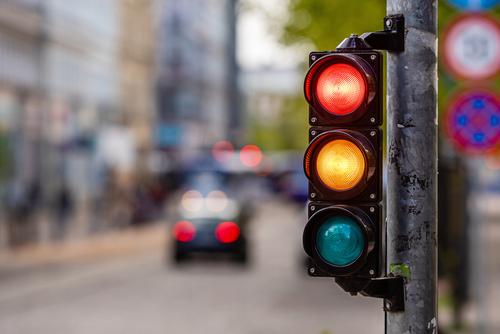 a city crossing with a semaphore, red and orange light in semaphore, traffic control and regulation concept

Brussels (Brussels Morning)The new section control on Gentsesteenweg in Molenbeek will come with some delay in the spring. This means that Brussels will have 7 route checks. A spokeswoman for the Brussels Minister of Mobility, Elke Van den Brandt (Green), reports this to BRUZZ. By February, 28 speed cameras will also be added, with dozens more to follow later.

Until two years ago, Brussels had only 3 section checks, in the Hallepoorttunnel, the Stefaniatunnel and on the Leopold III-laan. Three more were added last year: on the Jules Bordetlaan in Evere, the Mariemontkaai in Molenbeek and the Fernand Demetskaai in Anderlecht.

Another one will be added this year, on Gentsesteenweg. The new section control will be operational “in the spring”, according to Marie Thibaut de Maisières, spokeswoman for Minister Van den Brandt. The section control was previously announced for the autumn of 2021. A section control will also come into effect in the Leopold II tunnel once the renovation works on the tunnel are completed.

The reason why Brussels has so few speed checks is that it takes a long, uninterrupted stretch of road to measure the average speed. “Route control requires a long straight line with no intersections, otherwise the route cannot be calculated. In the urban context, far fewer places fit this description. But Brussels is increasingly deploying other types of speed cameras,” said the spokeswoman.

The region currently has 90 speed cameras, 7 LIDAR cameras (a radar that works on the basis of signals that are picked up again by reflection) that regularly change location, and 6 section checks.

In addition to the new section control on Gentsesteenweg, another 60 speed cameras will be added over the next two years, 28 of which will be operational by early February.

These are measures to reduce the number of injuries and deaths in traffic. These are linked to City 30, the speed limit of 30 km/h on most roads. “The speed decreases on all roads, and the noise pollution also decreases,” said Minister Van den Brandt about this earlier .

“Traffic accidents are less common and significantly less serious. With the number of fatalities halved, we are on course for vision zero , but the work is not finished yet. We continue to adapt the infrastructure and invest in speed control. Our goal remains zero dead and seriously injured in Brussels traffic.”