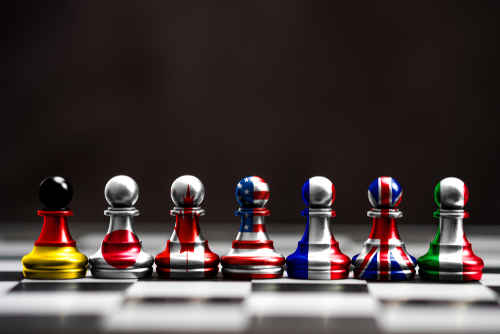 Brussels (Brussels Morning) G7 foreign ministers, together with EU High Representative Josep Borrell, issued a joint statement on Thursday condemning the Belarus authorities for forcing a commercial flight to make an emergency landing and then arresting an independent journalist and his companion.

The foreign ministers of Canada, France, Germany, Italy, Japan, the UK, the US and the EU condemned what they called “an unprecedented action” taken by Belarus authorities, in arresting Roman Protasevich and Sophia Sapega.

“This action jeopardised the safety of the passengers and crew of the flight”, the ministerial statement declared. “It was also a serious attack on the rules governing civil aviation. All our countries and our citizens depend on every state acting responsibly in fulfilling their duties under the Chicago Convention so that civil aircraft can operate safely and securely”.

A Belarus air force MiG-29 forced Ryanair flight FR4978 to alter its course and make an emergency landing in Minsk, despite already being near the border with Lithuania, where it was supposed to land.

Belarus President Alexander Lukashenko claimed he had been informed by Hamas that the Palestinian militant faction had put a bomb on the plane, and that this was why he had ordered the plane to land. Once the plane was on the ground, Belarus authorities arrested Protasevich and Sapega. Three other persons who disembarked from the plane are believed to have been Belarus’ KGB agents.

The G7 ministers called for the immediate and unconditional release of Protasevich, as well as other journalists and political prisoners being held in Belarus. “We will enhance our efforts, including through further sanctions as appropriate, to promote accountability for the actions of the Belarusian authorities”, the ministers said in their statement, noting too that the Belarus’ actions represent a serious attack on media freedoms.