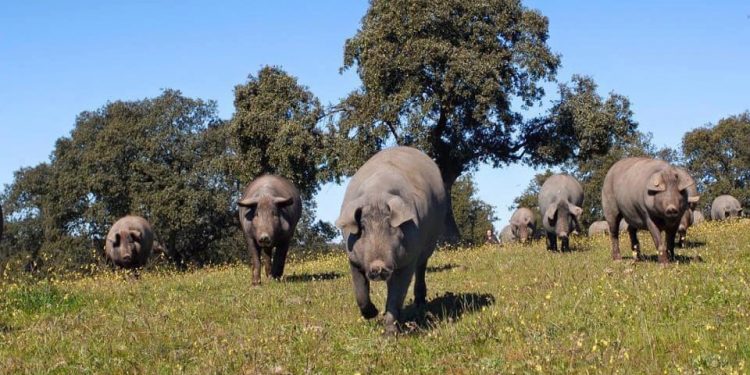 For the purist – and there are many purists – top-class jamón ibérico de bellota (acorn-fed Iberian ham) must come from Iberian blackfoot pigs that spend the last months of their lives eating acorns on the dehesa, a traditional Spanish or Portuguese pasture shaded by mature oak trees.

After being hung and dry cured for at least 36 months, the meat produced is silky with fat, and, say experts, has a flavour that can only come from the acorns. Spaniards consider jamón ibérico their greatest gift to international gastronomy – the caviar of the Iberian peninsula.

But now two American companies have had the incredible temerity to begin importing blackfoots to the US in order to make their own jamón.

Acornseekers, established in Flatonia, Texas, by two Spaniards, and Iberian Pastures, another Spanish-American venture in the state of Georgia, were both set up recently to capture the American market with their own version of Spanish ham. It will be marketed as jamón ibérico armericano or Ibericus meat.

Even worse, Iberian Pastures is taking advantage of the state’s native crop to feed the pigs not acorns but “pecans, peanuts and sunflower”.

According to Constantino Martínez, ham industry consultant: “The real problem is that we are a nation of idiots who have given away our heritage that our governments have done nothing to protect, and then the media present the people exploiting it as great innovators.”Advertisement

The diet of acorns is essential to producing the prized omega-9 fats that make the meat so delicious, he points out. Peanuts are “not the same thing at all”.

To call Marítinez a champion of authentic jamón ibérico would be an understatement. It is his passion to defend the purity and quality of what he describes as the flagship of the Spanish nation. He believes it should enjoy the same sort of protection as champagne.

He is furious with the failure of the Spanish government to protect jamón’s integrity and allow native blackfoot pigs to be exported to the United States.

“Their real game is to get access to the American market on better terms and at better prices than Spanish producers,” says Martínez. “Then they will move into Latin America and ultimately Asia, where Spanish jamón is very popular”.

Martínez rejects the argument that, as a variety, the blackfoot pig can’t be protected by a denomination the way champagne and parmesan cheese are, pointing out that the Japanese wagyu enjoys just this sort of protection.

However, the US has tended to be cavalier about such things. Parmesan cheese technically has to be from Parmigiano-Reggiano but under the name of parmesan it could be anything, and in the US it’s as likely to have come from Peoria as from Parma.

As the US never ratified the 1919 Treaty of Versailles, under which champagne became a protected brand, until recently American wine producers have been able to play fast and loose with the term. Now, it seems, what is sold as jamón ibérico may well originate in Dallas or Macon rather than Badajoz or Salamanca.