From Member States to Captive States — why blacklist EU tax-havens? 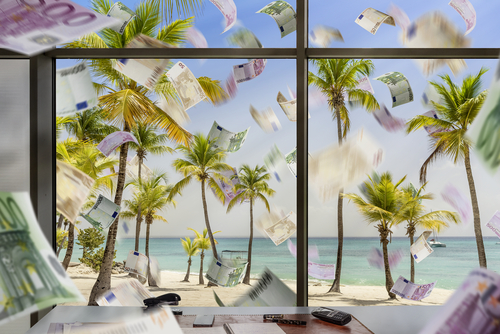 Athens (Brussels Morning) Why is Luxembourg the world’s second-biggest destination for foreign capital, given that it is a tiny country of about 2,500 sq. km. with less than 650,000 citizens, only half of whom are native Luxembourgers. These were among the puzzling anomalies investigative journalists of the Organized Crime and Corruption Reporting Project (OCCRP) examined in their recent “OpenLux” publication.

The answer lies in that highly prized and much sought after commodity – “secrecy”!

Activists talk of a “tax avoidance axis” in Europe. Up until December 2019, investors and white-collar criminals from across the globe directed $ 5.06 trillion in portfolio investment to Luxembourg. That is more than investments directed to Japan, Germany or the UK, according to OCCRP. The constant quest for the optimum tax and/or money-laundering havens is part and parcel of contemporary aggressive tax planning strategies and also a vital link in the “value chain” of white-collar organised crime.

Why would a country wish to become such an investment destination or “haven”, though? Undoubtedly, incoming flows of capital and investment bolster GDP growth, liquidity, and per capita income. “Not bad at all!” would be the spontaneous reaction of an amateur first exposed to this trade. “Not bad at all, at a first glance only!” should be the cautionary reaction of an informed professional.

Economies competing to cater for the opportunists

Aggressive tax planners and white-collar criminals are not prudent, long-term investors. They are the very opposite in fact, opportunists, driving a regulatory “race-to-the-bottom”, always sifting through the numerous economies worldwide that compete with one another eager to offer ever more favourable deals and made to measure terms and facilities designed to suit the camouflaged needs of their potential clients. These competing tax regimes become more “favourable”, but they also become more opaque, as they strive to accelerate capital and investment inflow.

However, a country whose growth model is based on such capital flows can find itself trapped in the shade cast by “giants with feet of clay”, all too ready to crumble under the weight of their own overleveraged assets. Such jurisdictions may easily end up as “captive states,” as each shady business conglomerate turns out to be a “Trojan Horse” that holds within it an economic and institutional threat.

Often, as soon as such business interests acquire key assets in specific sectors, they create a nexus of outsized influence over the national economy, thereby buying a claim to influence, if not dictate, the regulatory and institutional evolution of the state, with irreversible consequences for the image and international standing of the host country.

Notwithstanding these challenges, countries will often impair the competitiveness of domestic firms and investors, as they provide an array of privileges that favour international opportunistic investors over committed national economic actors. By doing so, they facilitate the inflow of international capital at the expense of public trust in national institutions.

EU at odds with itself over regulatory principles

While the United States is certainly a leader in the field of tax transparency and anti-money laundering, the EU, despite being a leader in benchmarking regulatory transparency, appears divided and at odds with itself, when it comes to the practice of monitoring and implementation of the regulatory principles set for its member states. There is little doubt that a number of EU member states would probably qualify for the EU’s tax-haven blacklist, if they were evaluated in accordance with the same criteria applied to third-country jurisdictions. For this reason, “naming and shaming” third countries is not always an easy option for EU member states.

The COVID-19 pandemic introduces new challenges into the picture. International experience has shown that, in times of crises, corruption will prevail, as authorities prioritize growth before regulatory oversight. It is precisely at such times, however, that we must defend transparency benchmarks, institutional integrity and openness.

In this scheme, the freedom and openness of information regimes is crucial. The state of emergency declared by countries around the world will bolster the overconcentration of power, but we should ensure that this is not to the detriment of good governance. Under the guise of the unfolding pandemic, global good governance standards are already giving way to economic expedience. Standard safeguards against tax evasion and money laundering – such as enhanced due diligence, the assessment of corporate domicile, country-by-country tax reporting, public registers of ultimate beneficiary owners, etc., are undermined in the name of a perceived economic emergency. A further danger is that we will lower the protection and guardianship we owe and must afford whistleblowers, further undermining our position in the global fight against the covert and opaque practices that enable tax evasion and money laundering to flourish.

For most of us, during times of crises, our first priority is to protect ourselves, our families and our communities. It is during such times that we also need to remain alert and vigilant as the gatekeepers of law and order, always keeping in mind that the negative precedents set in times of crisis can all too easily become the new normal.