From an earth stage to a willow Globe: theatre goes al fresco in the UK 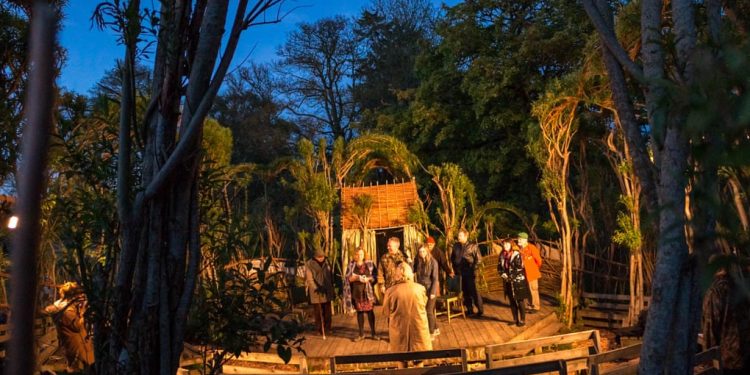 If you want to watch live theatre in the UK, you currently have two options: go online or into the great outdoors. With stage four of the government’s roadmap to reopening indoor venues now delayed until 15 August at the earliest, it’s open air theatre season. This summer, a range of companies are putting on socially distanced productions to be enjoyed in the sunshine or under the stars.

Cirencester’s Barn theatre was quick off the mark to launch BarnFest, offering comedy, cabaret, circus and other performances with a family-friendly focus. The theatre’s artistic director, Iwan Lewis, says that when the government gave the go-ahead for outdoor performances, “we jumped on it immediately”.

The Barn is an unsubsidised charity without funding from local authorities or Arts Council England. After the coronavirus outbreak, it offered live online shows starring a local clown, Tweedy, whose run at BarnFest swiftly sold out. “We had to get active,” says Lewis of the Barn’s blizzard of activity during the pandemic. “Otherwise the reality was that we weren’t going to be open at the other side of this.”

The Barn has a small team which Lewis thinks has helped them adapt in a dynamic manner, especially when setting up an al fresco festival. “We are next door to a wonderful organisation called Ingleside House. We said: ‘Can we use your gardens for outdoor theatre?’ They kindly said yes. We said: ‘By the way, we can’t pay for it.’” Their neighbours were happy to help and the Barn added another marquee to the existing one, giving them space for an audience of 120 compared with the theatre’s indoor capacity of 200. The response has been enthusiastic: “There’s a need for people to get back to theatre,” says Lewis.

With uncertainty about when they can resume indoor performances, the future still looks perilous. Lewis worries that the government’s £1.57bn arts bailout will have given a false impression that theatres are now safe and may hinder donations from the public. The Barn is applying for grants and continuing to innovate and plan cautiously. “It’s unlikely that we would take the risk on a Built by Barn production [one of their inhouse creations, rather than a touring show] in our theatre space in 2020,” he says. “But that doesn’t spell disaster to me.”

The Barn had its second birthday amid the shutdown in March but Scoot theatre company, which will visit the Cirencester venue in late August, is even younger. The company was launched by actor Max Hutchinson at the start of summer, its name a tribute to his son who has just learned to use a scooter. Hutchinson hopes the name captures the energy of his group who are taking A Midsummer Night’s Dream to UK cricket clubs. Their hour-long version gives the plot a cricket spin and is performed by six actor-musicians, including two real-life couples, which eases the problem of social distancing on stage. There will be specially designated squares for small audience groups to watch from. Making the safety precautions clear has been key to customer confidence says Hutchinson, who was a few weeks into a nine-month stint on The Woman in Black in the West End when theatres shut down in March.

A Midsummer Night’s Dream, with its spellbinding imagery of the natural world, is a perennial outdoor favourite. Shropshire farmer Tim Ashton has enabled a production this September in an earthen amphitheatre beside the burial mound he recently created in the tradition of neolithic burial barrows. Ashton believes that a landscape takes on a different quality when people are remembered there; this striking setting may underscore both the threat of death that hangs over Hermia in the play and the characters’ quest for harmony. Children are encouraged to dress as fairies for the family-friendly one-hour production.

Ashton decided to create the theatre, named The Sanctuary, when he saw how many local am-dram performances were being cancelled because of coronavirus. He was inspired by the story of Shakespeare’s troupe, The King’s Men, visiting Shropshire during the plague of 1603 to keep culture alive. “We are honouring what they did,” he says. “We are not the only generation to face this.” He hopes to set an example to his fellow farmers and others who may have spare outdoor space that they can offer for the arts, to be enjoyed by the community.

National Youth Theatre is planning two productions at The Sanctuary – a response to the climate crisis and a new version of Animal Farm. “In the face of immense challenges and pressure to help restore our precious cultural offering we all have a responsibility to try and make theatre happen,” says Paul Roseby, NYT’s artistic director. “Tim is leading that initiative quite literally from the ground up with his new earth amphitheatre.”

At Willow Globe, near Llandrindod Wells in mid-Wales, Sue Best and Philip Bowen have been inviting audiences to their own homebuilt theatre since 2006. Their venue is a scaled-down version of Shakespeare’s Globe, created with woven willow. Its summer season usually starts on 23 April, the date traditionally celebrated as Shakespeare’s birthday, and runs through to mid-September. This weekend, The Comedy of Errors will be their first live performance of 2020. It’s staged by touring company The Wet Mariners who recently did a theatre production on Zoom (A Midsummer Night’s Stream). The troupe assembled at Best and Bowen’s smallholding on Sunday, regrouping in person for the first time since lockdown began. They will stay on-site in a caravan during the run.

Audiences for The Comedy of Errors will be a quarter of the theatre’s usual 120 capacity. “The Mariners get jolly near full houses and it’s usually a bit of a squash,” says Best. This year there will be no walk-up sales, a seating plan will be in place (it’s traditionally unreserved) and actors won’t jostle among the audience as they normally do. There will be no tea or cakes served this time either, but Best and Bowen – like all those offering outdoor theatre, whatever their previous experience – are just pleased to bring actors and audiences together at last. And if they can get the wifi to work, they’ll be Zooming Comedy of Errors too.