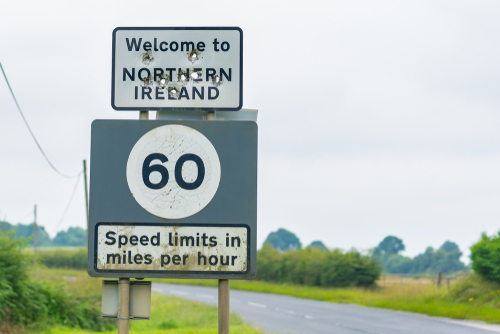 Editorial use only; a signpost and speed limit sign, the sign has the text ' Welcome to Northern Ireland ', taken outside Ballyconnell, Co. Cavan, Ireland, in July 2017.

Brussels (Brussels Morning) Northern Ireland’s loyalist paramilitaries are warning that protests and a significant political crisis could engulf the British province unless the EU agrees to make significant changes to the Brexit agreement, Reuters reported.

The Loyalist Communities Council already informed UK Prime Minister Boris Johnson that the group is temporarily withdrawing its support for the 1998 Belfast Good Friday Agreement, which brought an end to decades of sectarian fighting. In effect, this amounts to a threat to resume hostilities against Irish nationalists in Northern Ireland.

Talking to Reuters, Council head David Campbell said he was calling for fresh dialogue with the EU and Ireland with the goal of amending the Northern Ireland Protocol of the Brexit agreement, claiming it has breached the fundamental principles of the Good Friday Agreement.

“If it doesn’t happen, then they are opening a Pandora’s box, which leads to significant protest, to the bringing down of the Northern Ireland Executive and then into a significant political crisis”, Campbell declared.

The paramilitaries’ representative claims that the loyalists are angry “across the community”, with an “anger that transcends class and age groups”, which has reportedly united all disparate Unionist groups in Northern Ireland.

Unionists view the Protocol as unfair because it de facto cuts Northern Ireland off from the rest of the UK by implementing a customs border in the Irish Sea. The EU-UK Brexit Agreement did this to prevent the reintroduction of a hard border between NI and the Republic of Ireland – a key provision in the Good Friday Agreement.

“The current leaderships of the loyalist organisations are under extreme pressure from, let’s just say, the young Turks who perhaps see an opportunity to go to war on their terms”, Campbell cautioned.